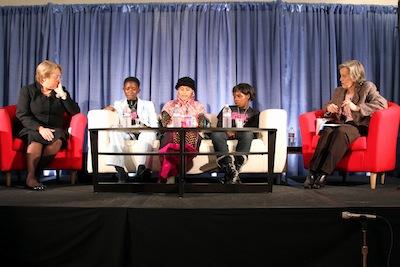 New York, 2 March 2012 - The fifty-sixth session of the Commission on the Status of Women (CSW) is being held at the United Nations Headquarters, in New York, until Friday, 9 March 2012. This year’s priority theme is “The empowerment of rural women and their role in poverty and hunger eradication, development and current challenges”. The emerging issue for this session is “Engaging young women and men, girls and boys, to advance gender equality”.

The SRSG participated on 28 February in a side event on "Ending the Silence: The impact of Early and Forced Marriage on Rural Girls”.

Joined by two girl advocates from rural areas in Sierra Leone and Pakistan, the SRSG participated in a panel discussion organised during the Commission on the Status of Women by Plan International. In a full room with an enthusiastic audience, the girls shared real life stories of the harsh realities endured by girls who have been victims of early and forced marriage.

"In some communities, early and forced marriage is deeply rooted in society and hard to abandon without the genuine mobilization and active involvement of all those concerned, including children and young people" , said SRSG Marta Santos Pais.

The event was moderated by journalist and campaigner Marianne Pearl and among the speakers were also Ms Lynn Featherson, Minister of Equalities and UK Government’s Ambassador for Violence against Women, Mr Jarmo Linden, State Secretary of Finland, Ms Shahnaz Wazir Ali, Special Assistant to the Prime Minister of Pakistan and Ms Penny Williams, Australia’s Ambassador for Women and Girls, and Ms Marie Staunton, CEO, Plan UK.

Early and forced marriage is a global issue affecting 10 million girls each year. Girls with little education, from poorer families and living in rural areas are at greater risk of early and forced marriage, including as a result of social and economic pressures on their parents. In developing countries, girls from the poorest households are three times more likely to get married before 18 years of age than those from wealthier families.In some countries, pregnant and married students are forced to leave school and may get both psychological and reproductive health problems.

Their young age and powerlessness make them more vulnerable to domestic violence and sexual abuse. Girls belonging to low socio-economic status are also at high risk of exposure to HIV infection. They may have fewer opportunities to seek information to keep safe, and to benefit from prevention, treatment and support services. In settings where dowry must be paid, dowry-related violence can lead to serious consequences, including death.

But as highlighted by all speakers, a process of change is within reach. Access to education and school retention was identified as human right in itself, as well as a critical factor in preventing early and forced marriage. Moreover, with strong law enactment and enforcement, universal birth registration, awareness-raising to address social norms condoning this practice, and mobilization of key actors, including religious and community leaders, women’s organizations, parents and young people themselves, it is possible to overcome deeply rooted social conventions and mobilize decisive and long lasting commitment to the elimination of the practice of early and forced marriage.

Empowering Rural Girls: From Invisibility to Agency side event

On 1 March, the SRSG participated in the side event: “Empowering Rural Girls: From Invisibility to Agency”  organized by UNICEF, UN Women and Plan International and UNGEI.

The event was moderated by Daniel Seymour, and it was an opportunity for the girls to break the invisibility that they face in their communities. The young participants were committed to “speak for the voice of the voiceless”, reminded Teresa, 17 from Sierra Leone.

“Men and boys are critical partners in this process of change!  Marta Santos Pais and girls from Pakistan, Sierra Leone and Malawi at the side event on Empowering Rural GirlsOtherwise we will find solutions for half of the population, but the other half will not be willing to listen”, said the SRSG.

Panelists shared personal experiences and national and  international good practices and the girls made a call for action,   to inform the way forward.

On the same day, the SRSG participated was a key note speaker at the event: "Girls Safety in homes, Communities and Schools”, held at the Church Center in New York, organized by the Task Force to prevent Violence against Girls and co-organized by PPSEAWA and League of Women Voters US.

SRSG meets with High Level officials during UN Commission on Status of WomeLynne Featherson, Minister for Equalities and United Kingdom’s Ambassador for Violence Against Women with Marta Santos Paisn

More information about the Commission on the Status of Women:
http://www.un.org/womenwatch/daw/csw/56sess.htm#org