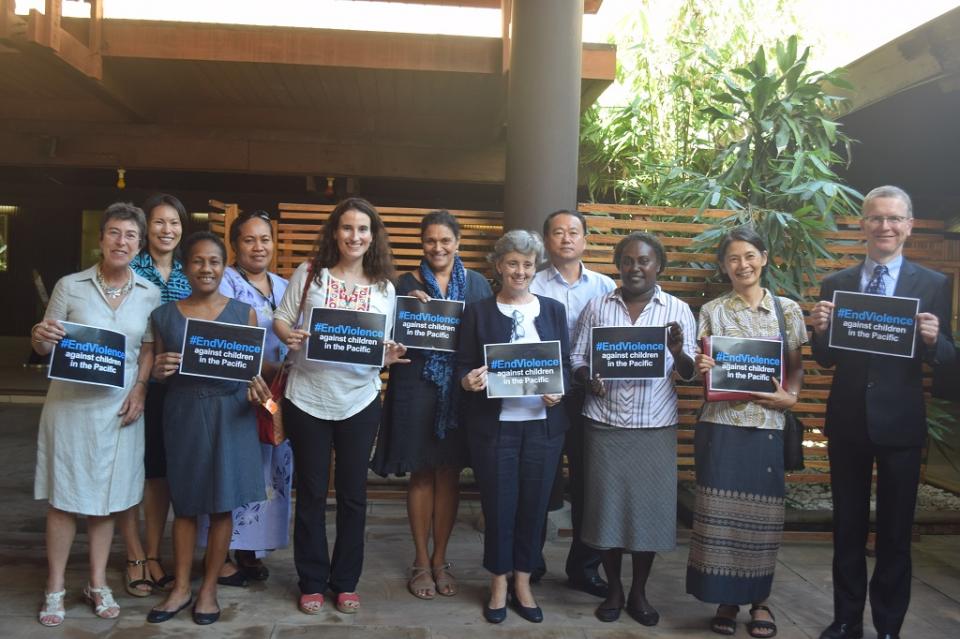 Honiara, 21 May 2015 - Concluding a three day visit to the Solomon Islands, the SRSG commended the government for the expression of its strong commitment to the prevention and elimination of violence against children through the enactment of legislation, policy reform and increased budgetary allocations for children. During her visit, the SRSG met the Prime Minister H.E. Mannaseh Sogavare and other high level officials, including the Minister of Foreign Affairs and External Trade, the Minister of Women, Youth, Children and Family Affairs, the Minister of Justice, and the Police Commissioner.

During her visit, the SRSG learned of the significant legislative measures adopted in the Solomon Islands, including the Family Protection Act 2014, which will convey a clear message of prohibition of all forms of violence against children. The SRSG urged that the draft Child and Family Welfare bill be given swift passage by Parliament as it will further strengthen child protection services, and help prevention and response efforts while enhancing the capacity of professionals.

The current review of the Solomon Islands Penal Code, with a special focus on sexual offences against children, is another crucial step to align national laws to address all forms of sexual violence against children. This will be a crucial step in support of the process of ratification and effective implementation of the Optional Protocol of the Convention on the Rights of the Child on the Sale of Children, Child Prostitution and Child Pornography, a step the SRSG encouraged the government to take as a matter of priority, including in meetings with the Minister of Foreign Affairs and Trade, and the Minister of Women, Youth, Children and Family Affairs.

The SRSG strongly welcomed the steady efforts of the government to strengthen Civil Registration and promote the universal birth registration of children. Through the setting-up of a new online system and database, a significant increase has already been achieved in birth registration among under-fives. The full roll-out of the new birth registration system will support better planning and provision of child protection services, and recording and follow-up of incidents of violence, and it should remain a priority for the country

In her meetings with senior officials, the SRSG highlighted the important opportunity presented by the new Sustainable Development Agenda, which has anticipated strategic targets on child protection, including the elimination of all forms of violence against children and universal birth registration. She urged the government to use the SDGs as a framework for national planning on child protection and for building partnerships with all stakeholders, including civil society, faith-based organizations, donors, UN agencies, and children themselves. With strong political will and steady action, Solomon Islands can become a pathfinder country in the Pacific region on prevention and response to violence against children.