International Day of Persons with Disabilities: SRSG Santos Pais calls for an end to all forms of violence against children with disabilities 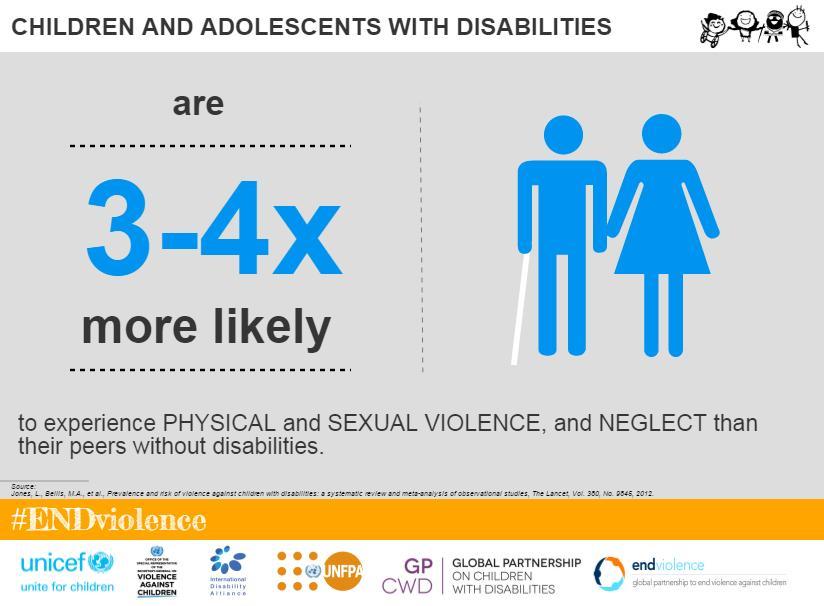 New York, 3 December 2016 - “Whether it happens in families or in the community, in schools or online, violence against children with disabilities must come to an end,” said SRSG Santos Pais. “In spite of limited data and research on this issue, available studies reveal an alarming prevalence of violence against children with disabilities, from higher vulnerability to physical and emotional violence when they are young, to greater risks of sexual violence as they reach puberty.”

There are at least 93 million children with disabilities around the world and they are 3 to 4 times more likely to experience physical and sexual violence and neglect than other children. Out of fear or as a result of lack of information and support, these children may feel pressed to conceal their suffering, afraid of stigmatization, harassment or reprisals and may be unable to make a complaint or report the incident of violence they suffer. Many are also frightened to lose the support of their caregivers and the attention and love of those they depend on.

Children with disabilities are also exposed to heightened risk of bullying and cyberbullying. In fact, online violence can have a particularly insidious effect on children’s emotional, physical and educational wellbeing. To prevent such risks and secure child safety and protection, children with disabilities are often discouraged or prevented from using the Internet. As a result, children end up being cut off from the empowering benefits of new technologies, including their ability to connect with other children in similar situations, to benefit from social support and to help them to build personal networks to prevent bullying, abuse and isolation.

The protection of children with disabilities from violence is a normative and ethical imperative. It is grounded in the Convention on the Rights of the Child and the Convention on the Rights of Persons with Disabilities and has gained a renewed relevance with the adoption of the 2030 Agenda on Sustainable Development. The Agenda includes for the first time a specific target (16.2) to end all forms of violence against all children, and provides a shared sense of purpose and a renewed impetus to leave no child behind.