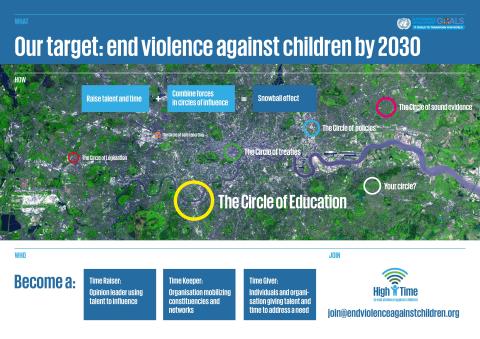 Ending violence against children is a legal and an ethical imperative. It is also a universal goal. It is high time to close the gap between international standards, political commitments and action. It is high time to mobilise all those who can promote a culture of respect for children’s rights and of zero tolerance for violence. In the countdown to 2030, everybody counts and everybody is needed. Governments, countless organizations and millions of individuals around the world share a commitment to the safeguarding of children’s rights and promotion of non-violent values that will secure children’s healthy development in a safe and nurturing environment.

The High Time to End Violence against Children initiative believes in the transformative power of leaders from all walks of life and people’s determination to stand up for children. It is an innovative Talent and Time Raising effort aiming at stimulating and supporting initiatives designed to stop violence against children worldwide and reach the violence-related targets in the Sustainable Development Goals, especially target 16.2 to end abuse, exploitation, trafficking and all forms of violence against and torture of children.

From commitment to action

The High Time to End Violence against Children initiative aims at connecting the need for action with the willingness and commitment to make a difference. Using ICTs, the Internet and Social Media, it offers a platform for governments, organizations, institutions, children and adults to express commitment to children’s freedom from violence and support initiatives to prevent and respond to violence.

The High Time to End Violence against Children initiative also offers valuable information and resources to support and monitor progress in global efforts to stop violence against children.  This collaborative effort enables access to expertise and advice, while providing visibility to partners’ initiatives.

It is High Time to end all forms of violence against children! 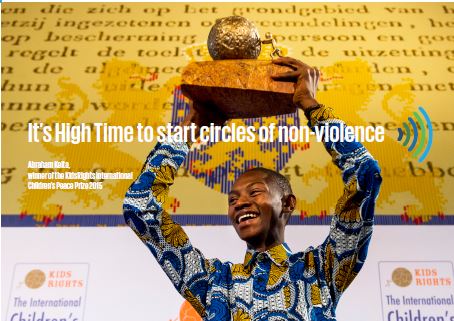 At the launch of the initiative, the UN Secretary-General highlighted in his message that "Violence can be prevented, and we know how.
By working to change social norms, beliefs and deeply-rooted attitudes and behaviours, and by addressing poverty, discrimination, social exclusion and weak rule of law—factors that we know fuel violence and increase children’s vulnerability—we can build a safer world for our children. It is high time to end all forms of violence against children."

It is indeed high time to close the gap between international standards, political commitments and action. It is high time to promote a culture of respect for children’s rights and of zero tolerance for violence.

And it is high time to ignite and mobilise all those who can actively engage in an effort to translate the vision of a world free from violence into a reality for all children!

The roll out of the movement will be designed to amplify and maximize the opportunities to engage at international, regional, national and local levels towards the common goal of accelerating progress in the elimination of violence against children. Participants will be invited to sign a pledge for children and adhere to the ethos of the High Time Movement.

Time keepers can join the High Time Movement as supporters and/ or implementing partners:
1.    As supporters by:
a.    Committing and undertaking concrete action to end violence against children;
b.    Identifying opportunities for the promotion of the initiative;
c.    Mobilising their constituencies and networks.
2.    As implementing partners by:
a.    Providing a platform for the High Time Movement at national or local level, monitoring High Time activities, in particular by taking all necessary measures to minimize risks and enhance child safety;
b.    Helping to measure progress.
Examples of Time Keepers: UN agencies and actors, International and Regional organisations and institutions, Ombudspersons, Civil Society organisations, Professional networks, Networks of Mayors, Business Sector alliances, Child-led Organisations.

Time Raisers are opinion leaders, authoritative voices and advocates in favour of children’s protection from violence. At least 20% of them should be children. Through their highly prominent involvement, Time Raisers promote a culture of non-violence and respect for children’s rights, inspiring others to join.

A core advisory group whose mission is to:
a.    Advise on the development and promotion of the High Time Movement;
b.    Support dialogue and engagement to advance international efforts towards SDG target 16.2;
c.    Stimulate and assess progress through their networks and actions;
d.    Strengthen access to, and use of information and communication resources to accelerate progress towards the elimination of violence against children.

The implementation of the 2030 Agenda is giving tremendous impetus to the common endeavour to end violence against children. Many Member States are adopting comprehensive and cohesive nationally owned sustainable development plans towards reaching the Sustainable Development Goals. These plans need to be supported by predictable resources and informed by solid evidence and robust, reliable and disaggregated data. Progress towards the Goals needs to be periodically reviewed, and it is essential that such national reviews address progress on the violence-related targets.

Investing in children is crucial if the targets are to be reached, but there is still a long way to go. While half of those living in extrem