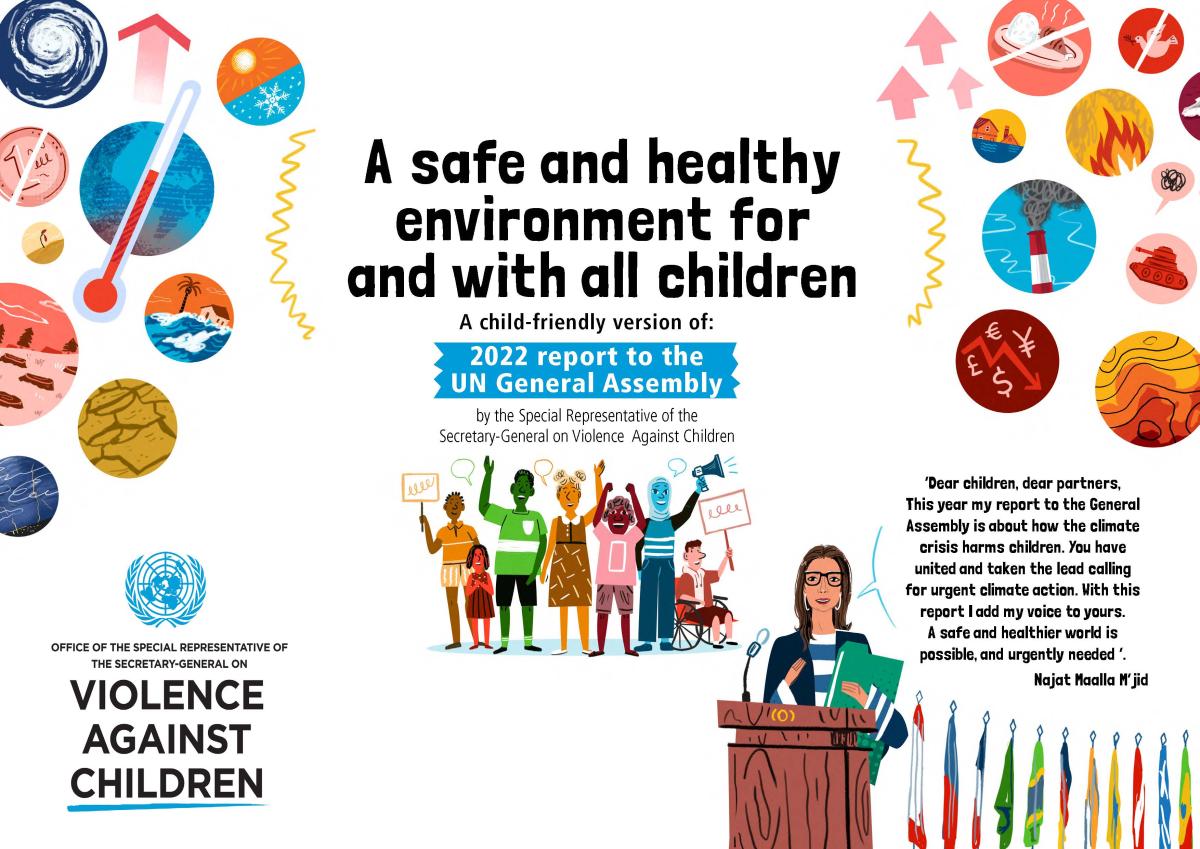 New York, 1 October 2022 - Ahead of the presentation of her annual report to the United Nations Third Committee, Dr. Najat Malla M’jid,  launched a child-friendly report in a briefing to children, focusing on how climate change affects violence against children: A safe and healthy environment for and with children.

With children moderating the session and asking questions, the Special Representative took note of children's views and recommendations, while addressing the concerns expressed by them throughout the event.

The online event was co-organized with Child Rights Connect, CovidUnder19, Terre del Hommes, Tremendas, and the World Organization of Scouts. It marked an important milestone in child rights and participation, emphasizing the importance of working with children as key agents of change in preventing and eliminating violence against children and receiving feedback from those who are the most affected by the phenomenon.

This ground-breaking moment is reflective of the importance of meaningfully involving children in decisions taken by duty bearers, as mentioned in Article 12 of the UN Convention on Rights of the Child.

An interactive dialogue between the Special Representative and Children

During her briefing to children, the Special Representative highlighted that climate change acts as a threat multiplier for violence against children:

"Climate change and other environmental crises have exerted serious disruptive influence on almost every aspect of everyone’s life from food security to the ability to make a life, and thus forcing families to adopt measures detrimental to children, such as pulling children out of school and making them child laborers, having girls married, among others. The child-friendly version of the report is issued to raise awareness of how climate change has increased or worsened the violent phenomenon that children are subjected to. It also aims to show the higher vulnerability of children - compared with that of adults - to climate and environmental shocks, especially the poorest, the most disadvantaged and those living in high-risk and fragile contexts." said Dr. Maalla M'jid.

The Special Representative reminded that children are the most affected yet least responsible for climate change. While they have been at the forefront of alerting the world regarding the negative impact of climate change, their voices are often not taken into account in political commitments.

The report shows that only 42% of all nationally determined contributions contain direct references to children or young people, only 20% contain a specific mention of children, and less than 2% mention their rights.

"Children have the right to know what is going on and to address their opinion so that they can hold governments and the international community accountable for their actions, policies, legislation, and their implementation." added Dr. Maalla M'jid.

This dialogue took place prior to the presentation of the report to the General Assembly, serves as an opportunity not only to present the report on the link between climate change and the violence against children, but for children to convey their concerns, realities, and recommendations to the international community and to transmit their questions and messages to decision makers worldwide.

The dialogue, together with the report, remains a milestone in child participation. Every government is being reminded that children are aware of what is going on, and that they need to act now, following the promise made when adopting the 2023 Sustainable Development Agenda.

All of us have a role to play, and we can make concerted efforts to diminish the negative impact of climate change.

The child-friendly version of the Special Representative’s report is available in all UN six official languages and was prepared, in close cooperation with children and young people, providing children with information and resources they might need to come up with questions and for future advocacy activities.