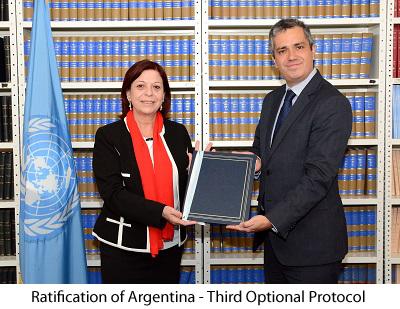 Geneva/New York 14 April 2015 - As we celebrate the first anniversary of the entry into force of the Third Optional Protocol to the Convention on the Rights of the Child on a Communications Procedure, the International Coalition Ratify OP3CRC, together with leading UN experts on children’s rights, including Kirsten Sandberg, Chairperson of the Committee on the Rights of the Child, the Special Representatives of the Secretary-General for Children and Armed Conflict, Leila Zerrougui, and on Violence against Children, Marta Santos Pais, as well as the Special Rapporteur on the Sale of Children, Child Prostitution and Child Pornography, Maud de Boer-Buquicchio, call on all States to make a quantum leap on the path to justice for children through the ratification of the Third Optional Protocol without delay.

The mechanism allows children or their representatives to report child rights violations to the UN Committee on the Rights of the Child in cases where the national legal system fails to provide a remedy for these violations. The Committee then investigates the complaints, and can ask governments to take action.

“This tool completes the international framework for the protection of children’s rights. It encourages States to improve their national justice systems and thus contributes to the most essential when it comes to children’s rights –implementation”, explains the Committee’s Chairperson Kirsten Sandberg. “It has the potential to allow child victims to be heard at the international level and ensure the accountability of States. Moreover, giving access to meaningful redress is essential for the recovery and rehabilitation of child victims”, stresses Maud de Boer-Buquicchio.

Ongoing conflicts all over the world show how vulnerable children are. “We need to continue our efforts to strengthen international and legal mechanisms, like the Third Optional Protocol, to ensure every child in the world has access to justice,” said Leila Zerrougui.

With Argentina’s ratification on the occasion of the first anniversary of the entry into force; 17 States have ratified and another 34 signed the Third Optional Protocol.

Marta Santos Pais encourages other States to join. “Child victims of violence are frightened to speak up and most of the times do not know where to go or whom to call to seek advice and support. With the OP3 this is something we can change.

The Protocol reminds States of their obligation to ensure access to justice and to child sensitive procedures and it opens avenues to develop and strengthen counseling, complaints and reporting mechanisms to address incidents of violence at the national level”, she emphasizes.

The UN child rights experts and the International Coalition Ratify OP3CRC call on all governments to commit to children's rights by ratifying the Third Optional Protocol on the occasion of the first anniversary of its entry into force.

·         Children can only submit a complaint to the UN Committee on the Rights of the Child if the country where the violation of their right(s) occurred has ratified the Third Optional Protocol of the CRC and if the violation occurred after the ratification.

·         The UN Committee on the Rights of the Child can only hear complaints against countries where it is alleged that the national legal system has been unable to provide an effective solution.

·         The Third Optional Protocol allows the Committee to hear a complaint about a violation of any right guaranteed under the CRC and its two Optional Protocols (namely on the Sale of Children, Child Prostitution and Child Pornography, and on the Involvement of Children in Armed Conflict).

·         Another 34 countries have signed the Third Optional Protocol, signaling their intention to ratify.