Expert Consultation on Prevention of and Response to Violence against Children in early childhood - 27-28 August 2012 in Lima, Peru 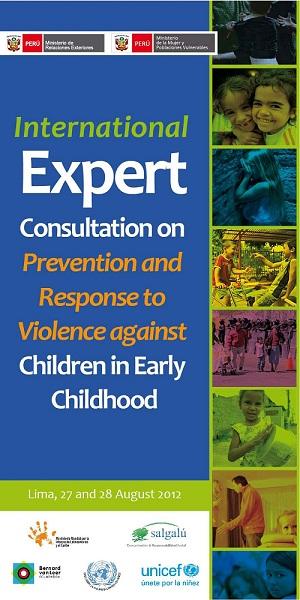 Lima (Peru) 28 August 2012 - The Expert Consultation aimed to identify achievements, persistent challenges and to formulate strategies for the prevention and response to all forms of violence against girls and boys in early childhood. The consultation had a global and regional dimension.

The meeting was broadcasted in English and Spanish in www.inversionenlainfancia.net and www.salgalu.tv.

Global dimension: The consultation seeked to make visible the phenomenon of violence against children in early childhood on a global level and its impact on the cycle of violence in societies and in the development of countries. It further seeked to stimulate actions through public policy and from private donors and investors. With this in mind, the consultation included the participation of experts from different regions active at promoting reflections and recommendations that may influence the global agenda on prevention and response to all forms of violence on early childhood.

Regional Dimension: The consultation focused on promoting and giving special attention to violence against boys and girls in early childhood, as a follow up process to the Regional Meeting held in Asuncion in 2011. It  also built on the efforts to protect boys and girls and prevent violence within the framework of early childhood initiatives developed by various countries in the region: Brasil, Chile, Colombia, Ecuador, Perú, Uruguay. Some of the above initiatives has been supported by the World Bank.

Expected outcomes: Special Representative and Bernard Van Leer Foundation will jointly develop a draft thematic report that will identify fundamental dimensions on prevention and responses to violence against young girls and boys, identifying promising practices, research conducted in this area and the formulation of recommendations and strategies to prevent and respond to all forms of violence against boys and girls in early childhood. A final thematic report will also be published, based on the preliminary draft and also including reflections and suggestions made by experts during the Consultation. A communications strategy for the prevention of violence in early childhood will help to give visibility to the meeting and disseminate its conclusions among policy makers, donors and activists. The communication strategy will be developed with the support of SALGALU and will likely involve a global communication agency.

Follow up: A national meeting in Peru to promote the recommendations of the Consultation and influence the national agenda for the prevention and response to violence against girls and boys in early childhood. The Expert Consultation will contribute to the follow up process to the implementation of the UN Study recommendations and feed into the Special Representative’s Annual Report to the General Assembly in October 2012. In addition, the conclusions and recommendations of the Consultation will provide concrete guidance for current reflections on the issue of elimination of violence against children within regional processes promoted by the Special Representative. Implementation of the above mentioned communication’s strategy will include translation of the outcomes in English and Spanish.

As in previous Experts Consultations, the meeting had approximately 30 participants in addition to the organizers’ representatives including International experts; High level representatives of member States governments and associates from MERCOSUR, United Nations including UNICEF, WHO, UNESCO, World Bank, and the Committee on the Rights of the Child, civil society representatives, and donors.