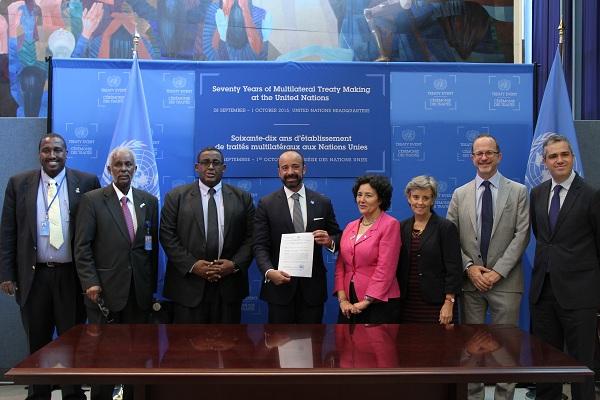 New York 2 October 2015 – “Somalia’s ratification of the Convention on the Rights of the Child is a significant and very welcome step toward realizing the rights of the country's 6.5 million children.

“The children of Somalia face enormous challenges. Somalia today has one of the highest under-five mortality rates in the world, alarming malnutrition rates, and very high levels of violence affecting children.

“By becoming the 196th nation to ratify the Convention, Somalia has committed to uphold the dignity and worth of every child and translate the obligations of the CRC into concrete actions, especially for those children in greatest need and at greatest risk.

“The provisions of the Convention provide a legal framework for the Somalian Government’s efforts to uphold children’s rights, as it continues its work to put in place comprehensive domestic legislation aimed at protecting children.

“As the world comes together around the new Sustainable Development Goals, we look forward to supporting the efforts of the Government and the people of Somalia to make children’s rights the cornerstone of their country’s social progress – and in so doing, secure better lives and brighter futures for every Somali child and for Somalia itself.

“This brings us closer than ever to universal ratification of this central human rights treaty.”

Leila Zerrougui, Special Representative of the Secretary-General for Children and Armed Conflict

Marta Santos Pais, Special Representative of the Secretary-General on Violence against Children

Benyam Dawit Mezmur, Chairperson of the Committee on the Rights of the Child