Marrakesh Declaration: Adoption of a milestone for children's rights 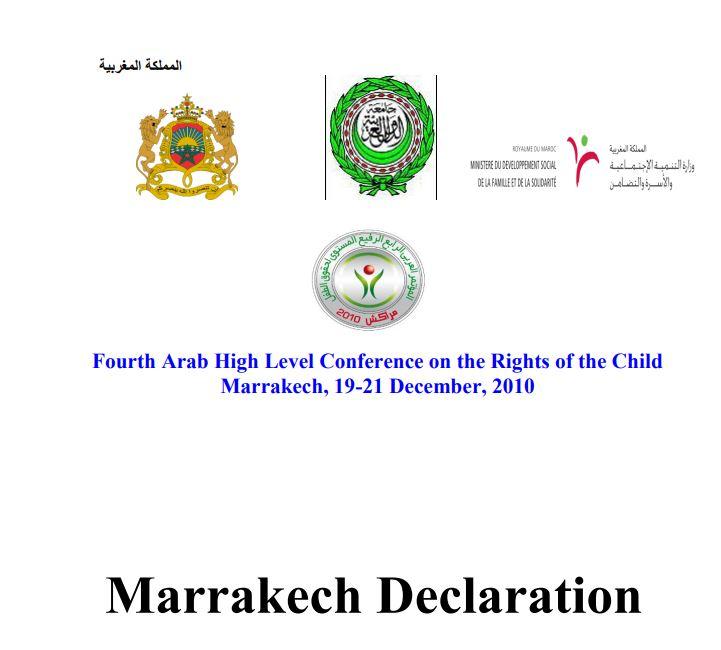 Amman 21 December 2010 - Participants at an Arab conference on children’s rights today adopted a declaration calling for further action to protect children and promote their rights.

The Marrakesh Declaration came at the end of the Fourth High-Level Arab Conference on Children’s Rights, a three-day event organized by the League of Arab States with the participation of the United Nations Secretary-General’s Special Representative on Violence against Children, UNICEF, government ministers from member countries of the League of Arab States and representatives from non-governmental organizations.

“Across the countries in the region, important achievements have been made with respect to several Millennium Development Goals, including significant reduction in both infant and child mortality and high rates of enrolment and gender parity in primary education,” said Shahida Azfar, UNICEF acting Regional Director for the Middle East and North Africa. “However, these gains conceal widening gaps between the richest and poorest children, which requires prioritizing the delivery of interventions to children who are the most deprived, who suffer the greatest discrimination and who fall further outside existing safety nets.”

Azfar stressed the need to urgently address these disparities and vulnerabilities that are rooted in poverty, geographic location, gender, disability or ethnicity to ensure that all children – without discrimination – enjoy their full rights.

Countries in the Middle East and North Africa continue to be plagued by violence against children: Some 89 per cent of children are subject to physical or psychological punishment, 3.5 million women aged between 20 and 24 were married before they turned 18, and female genital mutilation affects 96 per cent of women in Egypt, 93 per cent in Djibouti and 89 per cent in Sudan.

“Violence takes place in all contexts, including where children are expected to enjoy a secure environment and special protection - in care institutions, in the school and also within the home,” said Marta Santos Pais, the United Nations Secretary-General’s Special Representative on Violence against Children. “The protection of children from all forms of violence needs to evolve from being a concern of a few into a priority for all.”

The Marrakesh Declaration, adopted unanimously at the end of the conference, calls for better data on issues related to the protection of children from violence, exploitation and abuse, the adoption of legislation to protect children from all forms of violence, measures to end children’s exposure to violence through the media, and the end of child labour, early marriage and corporal punishment.