Protecting Children from Harmful Practices - SRSG stresses urgent need to safeguard the supremacy of human rights in case of conflict between national, customary and religious laws 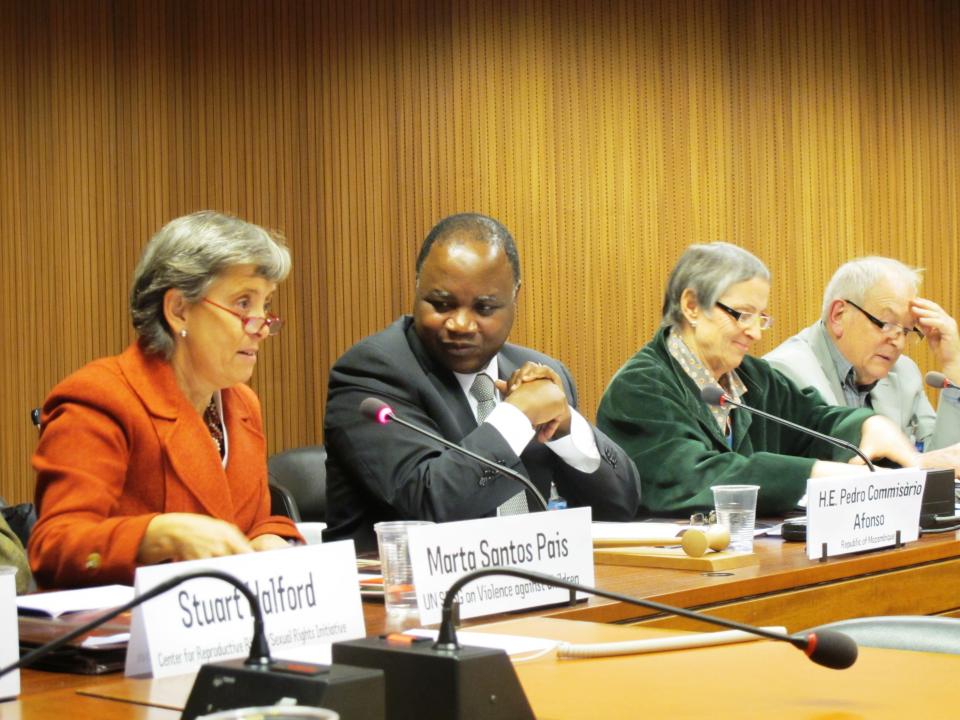 Geneva, 7 March 2013 - On March 7th 2013, as a contribution to the Human Rights Council’s annual discussion on the child’s right to health, the Special Representative and Plan International organized a side-event "Protecting Children from Harmful Practices" in Geneva. The meeting was organized in the framework of the annual day of discussion on the rights of the child to highlight the enormous challenge presented by harmful practices to the realizations on children’s right to health.

Two reports were launched during the event: the joint publication by the UN Special Representative on Violence against Children and Plan International on "Protecting Children from Harmful Practices in Plural Legal Systems" as well as the report by the International NGO Council on Violence Against Children on "Violating children’s rights: harmful practices based on tradition, culture, religion or superstition."

The discussion focused on human rights standards protecting children from harmful practices, with a special emphasis to child marriage and its linkages with sexual and reproductive health rights. Patricia Schulz highlighted the provisions in the Convention on the Elimination of Discrimination against Women and its safeguards against girls’ early and forced marriage, and the role of the CEDAW Committee in this regard.

Marta Santos Pais recalled that "each year, more than 10 million girls get married under the age of 18, most often against their one will and in many cases as young as 7 years old. Many of these children live in rural areas and belong to the most excluded groups in society. Their young age and low status in their families and communities make them particularly vulnerable to violence and sexual abuse by their much older husbands".

"Challenges in eradicating child marriage include the lack of a clear legal prohibition of harmful practices in many countries around the world. Indeed, only half of the world’s countries have a legal minimum age for marriage of girls and boys at 18 years" – she added. In a large number of countries, a system for birth and marriage registration does not exist to ensure that children at risk are visible. In this regard, SRSG Santos Pais stressed the urgent need to safeguard the supremacy of human rights in case of conflict between national, customary and religious laws, a dimension her report had emphasized.

It was noted in the well-attended side-event that national and international communities are increasingly recognizing child marriage as a serious human rights violation as well as a barrier to key development outcomes. The Special Representative and Plan strongly encourage Member States to take violence against children into account in shaping the post-2015 development agenda. Protection of children against all forms of violence, including harmful practices such as child marriage and challenges in achieving universal birth registration would deserve due attention from the world at large.

Peter Newell highlighted that "legislation is important, not necessarily to prosecute and punish parents, but the law also has an educational and preventive effect".

Stuart Halford emphasized that taboos towards young people’s sexuality lead easily to denial of young people’s autonomy over their sexuality and lack of comprehensive sexual education as well as lack of sexual health services. This attitude also contributes to child marriages and other harmful practices forced upon young people without their consent.

Selina Amin emphasized the devastating implications that early marriage has for large numbers of girls around the world. "Indeed, complications from pregnancy and childbirth are the leading cause of death and ill-health among girls and young women aged 15 to 19 in developing countries. In addition, beyond the health implications, child marriage denies children the opportunity to fully develop their potential as productive and empowered citizens".