SRSG addressed the World Forum on Human Rights hosted by the Government of Brazil on December 10 – 13, 2013 in Brasilia 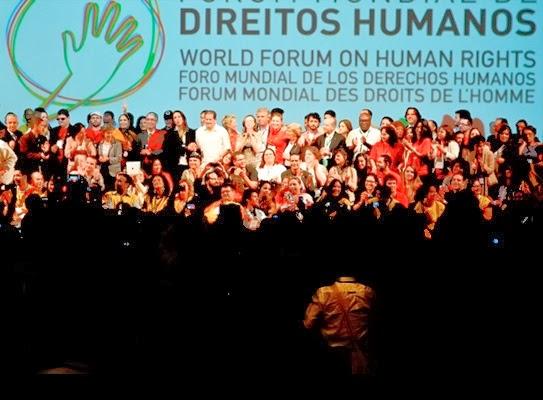 Brasilia (Brazil) 13 December 2013 - The Special Representative of the Secretary-General on Violence against Children, Ms. Marta Santos Pais, addressed the World Forum on Human Rights in which more than 9000 participants from around the world took part. The World Forum was convened by the Government of Brazil to commemorate the 65th anniversary of the Universal Declaration of Human Rights.

In her address on “Safeguard of Human Rights and the Fight against Violence” the SRSG presented the key findings of the Global Survey Report, conducted by her office, highlighting the progress achieved and persisting challenges on the implementation of the UN Study on Violence against Children, as well as priority areas for future action.

The First World Forum was designed to mobilize support and to re-energize actions for the promotion and safeguard of human rights and children’s rights. The Second World Forum will be held in Morocco, in December 2014.

During the World Forum, the Special Representative launched with UNICEF, the Inter-American Commission on Human Rights and the Government of Brazil a regional initiative to bring to an end the placement in institutions of children below the age of three. The initiative is framed by the Convention on the Rights of the Child, the UN Guidelines on Alternative Care of Children and the UN Study on Violence. It highlights that placement in residential care has a detrimental impact on children’s development and future life and is often associated with incidents of neglect, violence and abuse. This Call for Action urges States to support parents and families in their child rearing responsibilities, to safeguard children’s right to live in family environment and to be protected from violence at all times.

The Special Representative, UNICEF, the Inter-American Commission on Human Rights andthe Government of Brazil invite you to join the Call to Action http://www.falepormim.org/#