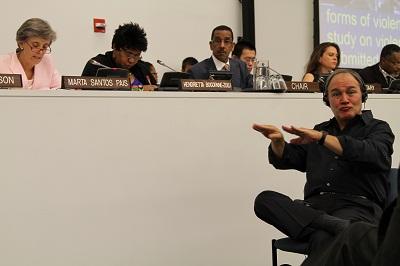 New York, 13 September 2012 - SRSG Santos Pais participated in a roundtable discussion on children with disabilities during the fifth session of the Conference of States Parties to the Convention on the Rights of Persons with Disabilities, alongside with Ms. Hendrietta Bogopane-Zulu, Deputy Minister of Women, Children and People with Disabilities of South Africa, UNICEF and civil society representatives.

In her presentation, SRSG Santos Pais stressed the widespread pattern of violence endured by children with disabilities, acknowledged positive and encouraging progress in preventing and addressing incidents of violence and highlighted strategic recommendations for future action.

Ms. Santos Pais identified five key areas to secure a protective environment for children around the world including investing in early childhood development and education;  promoting public awareness, capacity building of professionals working with and for children, enacting strong legislation in all countries to ban all forms of violence against children, including within the home, and universal ratification and effective implementation of core human rights treaties, including the Optional Protocol to the Convention on the Rights of the Child on a Communications Procedure, adopted in December 2011 by the General Assembly.

SRSG Santos Pais recognized the decisive contribution children and young people can make to this process of change.

“We should work together to put in place the right conditions to enable children with disabilities to participate and act as real partners in future sessions of this  important conference of States Parties.”