SRSG co-organizes expert consultation on Data and Research in Sweden 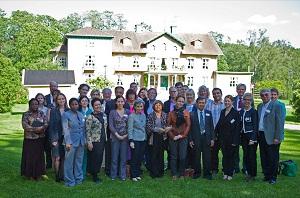 Satra Bruk (Sweden) 21 June 2012 - The Special Representative of the Secretary-General (SRSG) on Violence against Children joined the Government of Sweden and the Children’s Welfare Foundation Sweden in the organization of an expert consultation on knowledge for change, data and research.

More than 40 high level experts participated in the meeting held from 19 to 21 June.
The meeting aimed at assessing progress on the consolidation of data systems and research on violence against children, and considering ways of promoting the use of knowledge and research in policy and action to protect children from violence.

During the meeting significant initiatives and experiences were shared by a wide range of stakeholders, including United Nations Agencies, government officials, independent institutions for children’s rights as well as research and academic institutions and civil society organizations. participants the possibility to share their own experiences in working with data collection and research on violence against children from different perspectives: from governmental institutions and independent ombudsman for children as well as from international organizations, academia and non-governmental institutions.

The discussions acknowledged positive developments in the field of data collection, analysis, dissemination and research and identified critical knowledge gaps on children’s protection from violence including to address ethical concerns associated with children’s involvement with the development of information systems and the promotion of research.

“Most countries have multiple institutions gathering and handling their own information; or a central institution collecting information from limited sources, or focusing only on one setting or form of violence. Progress appears very uneven, with insufficient efforts to develop a cohesive and well-resourced national data and research agenda on violence against children to help break the invisibility of this phenomenon, to fight impunity and promote evidence-based decision making,” said SRSG Santos Pais.

The conclusions and recommendations from the meeting will inform the SRSG report to the General Assembly, presented in October 2012.