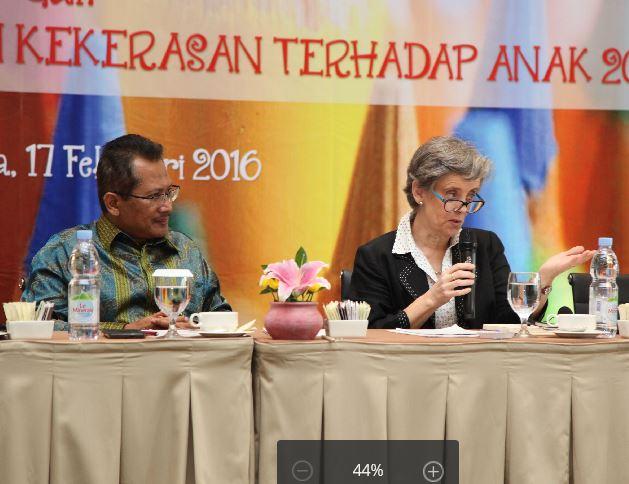 Jakarta, Indonesia 19 February 2016 - The Special Representative of the Secretary-General on Violence against Children, Marta Santos Pais has completed a mission to Indonesia during which she met Vice-President Jusuf Kalla and other senior officials of the Government of Indonesia, including Minister of Women’s Empowerment and Child Protection Yohana Yembise, and Education Minister Anies Baswedan to discuss efforts towards protecting children from all forms of violence.

SRSG Santos Pais welcomed the significant progress since her visit a year ago when she had urged Indonesia to be a lighthouse in the region and globally in shaping policies to end violence against children and ensuring their steady implementation. The Government of Indonesia has placed violence against children as a priority concern in its policy agenda and is determined to make significant progress over the years to come.

Santos Pais congratulated Indonesia for adopting a National Strategy for the Elimination of Violence against Children and a National Action Plan on Child Protection which together provide a comprehensive framework to prevent and respond to incidents of violence. “Indonesia’s National Strategy recognizes the crucial role of sound data, and comprehensive legislation to prohibit all forms of violence and provide support to child victims, as well as the value of empowering children and supporting families in their caregiving role. These policies need now to be brought to all levels of society, leaving no child behind,” SRSG Santos Pais stressed. 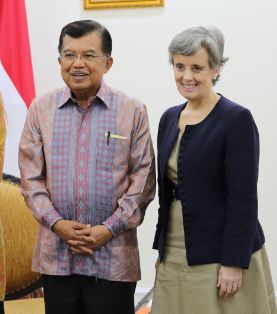 As she noted in her meetings and in a keynote speech at a national seminar on the dissemination of the National Strategy and the National Action Plan with national and provincial government officials, academia, civil society, as well as representatives of the Youth Forum, “the effective implementation of the National Strategy will be an important step to secure protection of children in all settings, including at school, at home and in the community. It will also be a crucial contribution to achieving the Sustainable Development Goals (SDGs), especially target 16.2, which aims to end violence against children by 2030.”

At the end of her visit, Santos Pais highlighted Indonesia’s commitment to end all forms of violence against children: “This commitment confirms Indonesia’s place as a global leader as implementation of the SDGs begins” she said. “If we allow violence to continue, it will destroy social and economic gains that took years and decades to build. To achieve progress steady implementation efforts are needed, including strengthening coordination at all levels of the administration, consolidating data to capture the magnitude of violence in all settings, enhancing legislation to ban all violence, and widening awareness raising and social mobilization to overcome deeply rooted practices, attitudes and behaviour which condone violence against children. With the new national strategy on the elimination of violence against children, Indonesia can make a decisive contribution to realizing the vision of the SDG agenda to create a just, equitable, tolerant and socially-inclusive world in which the human rights and human dignity of everyone are realized, leaving no one behind!” 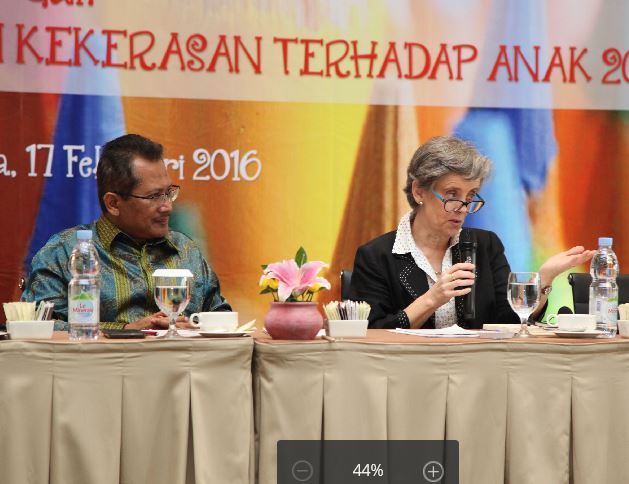