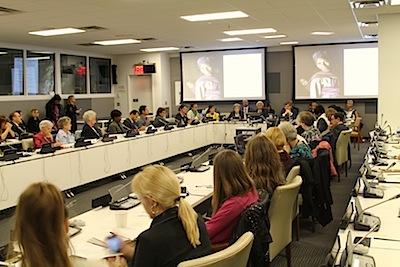 New York 11 October 2012 - As the world came together to commemorate the first International Day of the Girl Child, the Special Representative on Violence against Children, the Government of Angola and Plan International co-organized an interactive panel discussion on protecting children from harmful practices in plural legal systems, where national legislation is in place alongside customary and religious laws.

Throughout the world, countless numbers of girls and boys fall victim to harmful practices, including female genital mutilation or cutting, early and forced marriage, degrading initiation rites, breast ironing, son preference, stoning, honour killings, forced feeding, witchcraft rituals and many other less-known forms of harmful practice. Often violent in nature, these practices compromise the development and education of the child, have serious and long-lasting health and psychological consequences, and may result in disability or death.

The panel discussion, chaired by H.E. Ambassador Ismael Abraão Gaspar Martins, Permanent Representative of Angola to the United Nations, aimed to raise awareness about root causes and consequences of harmful practices against children, support children’s advocacy, and share recommendations to prevent and respond to harmful practices through law reform.

At the event, a new report was launched “Protecting Children from Harmful Practices in Plural Legal Systems”. The report reviews positive legislative developments in different regions of the world, with a special emphasis on Africa, to strengthen children’s legal protection from violence as a result of harmful practices, and addresses the interplay between statutory, customary and religious laws. The report was informed by an international expert consultation held in June 2012, in Addis Ababa, Ethiopia.

Ambassador Dejan Sahovic,Representative of the President of the General Assembly, stressed the significance of the report, documenting good practices and promising developments in Africa and in other regions, and built upon a strong human rights foundation.

Special Representative, Ms. Marta Santos Pais summarized the highlights and recommendations in the report. She stressed the importance of a clear legal prohibition of all forms of violence against children, including harmful practices, and recalled that human rights need to prevail if there is a conflict between statutory legislation and tradition. Furthermore, "with awareness raising and the involvement of communities concerned, there is a real opportunity to promote the lasting abandonment of harmful practices; and to give legal reform and implementation a true chance of succeeding. This is in essence, what this new study is about".

Nurul, Plan International’s Girl Ambassador from Indonesia, illustrated the critical dimension ofchildren’s empowerment and advocacy to end harmful practices.Nurul and her peers conducted a survey in their community of 135 children deemed vulnerable to child marriage. Amongst the 31 children that had been married off the past five years, six were boys and 25 were girls.

She explained that there is a misconception based on the belief that girls who are not married will be an economic burden to parents. However, in Nurul’s community there are many married girls still living with their parents, and they are in fact worse off economically because they got married and as a result dropped out of school and do not have any income generating opportunities.

Mr. Nick Alipui, Director of Programmes, UNICEF presented field programmatic experiences and successful achievements in preventing and addressing harmful practices. Highlighting that social norms need to be addressed if progress is to be achieved, in a process of dialogue and engagement with families and communities concerned, he recalled that “If you want to go fast, you go alone. If you want to go far, you go together”.

Ms. Sarah Stevenson, Plan’s Global Child Protection Advisor emphasized the need to strengthen girls’ role in combatting child marriage and how they be empowered for their own protection.

Ms. Elda Moreno, Head of the Gender Equality and Human Dignity Department, Council of Europe emphasized that harmful practices such as forced and early marriage or genital female mutilation also constitute a serious problem in Europe; If there is something that all these practices have in common it is that the word “harmful” is an understatement..

Let us all join hands to ensure that girls around the world enjoy a life free from violence!