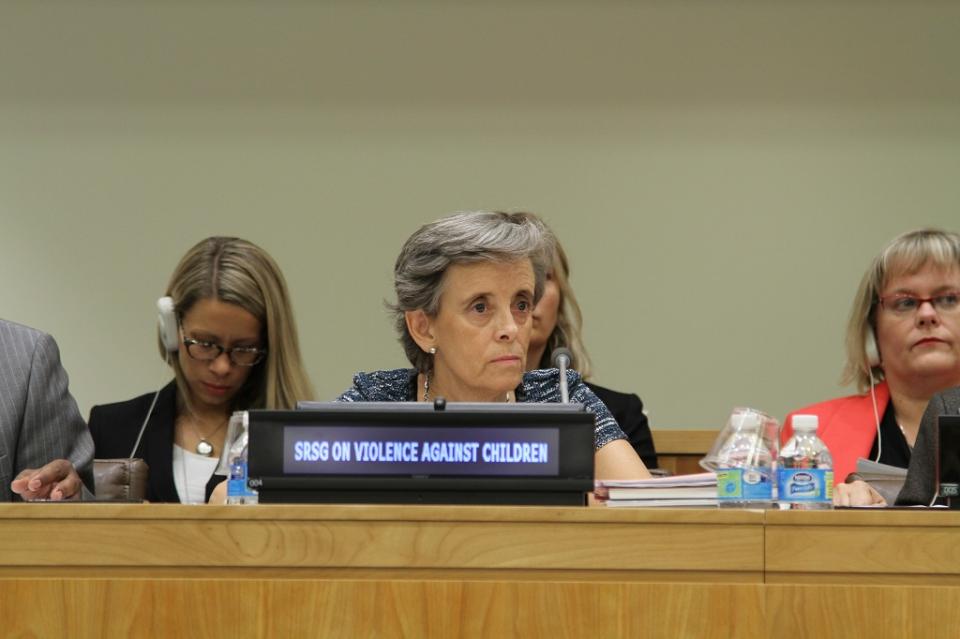 New York, 8 September 2016 - Progress in implementation of the Agenda 2030 targets on violence against children needs to be at the heart of the policy agenda of every nation, urges SRSG Santos Pais

This year’s annual report of the SRSG-VAC to the UN General Assembly focuses on the historic opportunity presented by the 2030 Sustainable Development Agenda to put children’s freedom from violence at the heart of the policy agenda of every nation. The inclusion in Agenda 2030 of a distinct target (16.2) to eliminate all forms of violence against children provides a unique opportunity to galvanize political will and reignite worldwide action. The SRSG recalls the UN Study on Violence against Children, whose 10th anniversary is commemorated in 2016: “its recommendations remain as valid today as ten years ago, and their potential to promote a quantum leap in global implementation efforts to achieve the Agenda 2030 targets to protect children from violence endures.”

The SRSG’s report stresses the urgency and scale of the task ahead. A recent study estimates that over the past year at least one billion children between 2 and 17 years of age were victims of some form of violence. Across nations, the number of children involved in exploitative work and slavery-like practices reaches countless millions; in developing countries, one in every three girls is married before age 18; and children below 15 years of age represent 8 per cent of victims of global homicides. In addition to domestic and community violence, conflicts affect millions of children and the world confronts the greatest wave of child migrants and refugees since the Second World War, with all the attendant risks of violence and exploitation these desperate situations bring in their wake.

The report recalls important recent initiatives that will help move towards the elimination of all forms of violence against children by 2030. These include the High Time initiative – launched by the Special Representative in March 2016 to mobilize governments, international and regional organizations, professional associations, faith-based organizations, the business sector and civil society partners, as well as children themselves – which is widening the circles of those committed to freeing all children from violence and the effectiveness of their actions; the development by WHO of a global action plan to strengthen the role of health systems in addressing violence against children, and INSPIRE, a package of proven evidence-based interventions to prevent and respond to incidents of violence; the launch of new global partnerships in support of the SDGs including Alliance 8.7 on child labour, and the Global Partnership to End Violence against Children; and the continued progress in strengthening evidence to inform policy making, and in legislative reforms to protect children from violence, clearly confirmed by the increasing number of countries with comprehensive legal bans on all forms of violence.

Similarly, regional developments have been crucial to promote national level action towards the achievement of violence-related SDGs, and the past year has been marked by the adoption of regional plans by ASEAN and the Council of Europe, and initiatives in Africa, South America, South Asia and the Arab region working toward the same objective.

The SRSG report also provides an update on the development of the Global Study on Children Deprived of Liberty, requested by the General Assembly. In support of this process, the SRSG organized with UNICEF a regional conference on the oversight, inspection and monitoring of places where children are deprived of liberty in the framework of the criminal justice system. The findings and recommendations included in the report will be an important contribution to the Global Study.