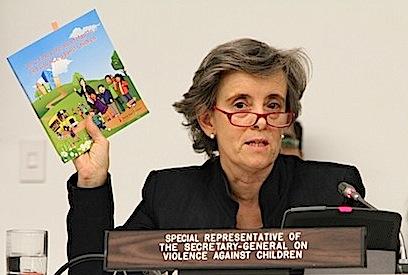 New York, 17 October, 2012 – SRSG Marta Santos Pais presented her third annual report to the General Assembly, highlighting the achievements made for the protection of children from violence in all settings. Ms. Santos Pais placed special emphasis on three overarching recommendations of the UN study on violence against children: the development in each State of a comprehensive strategy on violence against children; the introduction of an explicit national legal ban on all forms of violence, in all settings; and the consolidation of data and research in this field.

Ms. Santos Pais expressed her appreciation for the critical support of Member States and the strong partnerships developed with UN agencies and human rights mechanisms, regional organizations, national institutions, civil society partners and children themselves. She stressed the “visible strides made towards the prevention and elimination of violence against children” since her appointment as SRSG.

Ms. Santos Pais highlighted progress achieved in the consolidation of the human rights foundation for the protection of children from violence, through an increase in the ratification and implementation of core child rights treaties, particularly the Optional Protocol on the Sale of Children, Child Prostitution and Child Pornography, and the adoption by the General Assembly of the Optional Protocol on a Communications Procedure.

Over the past three years, the SRSG conducted more than 70 missions in all regions. The visits helped to promote progress in the three priority areas identified by the mandate: the number of countries with a policy agenda to address violence against children grew from 47 to more than 80; nations with an explicit legal prohibition of all forms of violence increased from 16 to 34; and there had been a visible increase in the number of national surveys conducted on children’s exposure to violence.

The SRSG also stressed the decisive role played by the strengthening of strategic regional partnerships across regions to move the agenda forward.

“Since last year’s session of the General Assembly, this process has been further enhanced with the organization of three important regional consultations. This collaboration has been instrumental to reenergize political support and accountability for the protection of children from violence. And it has led to very concrete results: the adoption of significant political commitments and roadmaps in seven regions, the establishment of monitoring review systems in most of them, and the development of regional implementation studies to assess progress and mobilise action to address persisting challenges and priority concerns”, said the SRSG.

During her presentation, the SRSG highlighted key findings of the Global Progress Survey conducted by her office in 2012 and emphasized the critical importance to include the protection of children from violence as a priority concern for the global development agenda beyond 2015.