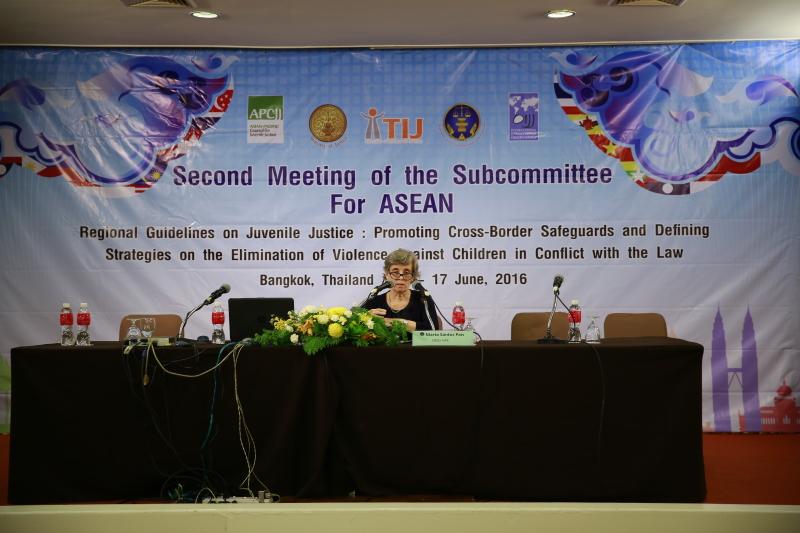 Bangkok, 17June 2016 - SRSG Santos Pais participated in Bangkok, Thailand, in the second meeting of the Asia-Pacific Council for Juvenile Justice Subcommittee for ASEAN. Addressing juvenile justice priorities for the region, the meeting provided a momentous platform to brief governmental delegations from Cambodia, Myanmar, Vietnam, Brunei, Indonesia, Malaysia, Philippines, Singapore and Thailand on the UN Global Study on Children Deprived of their Liberty and to identify opportunities for the ASEAN region to support its important preparation.

“The engagement of the Asia-Pacific Council for Juvenile Justice in supporting the Global Study is fundamental. With its large composition and sound technical expertise, the Council is in a privileged position to provide insightful information and strategic recommendations on children deprived of liberty. This includes gender sensitive information on particularly vulnerable groups of children, on independent monitoring mechanisms of places of detention, and on non-custodial alternative measures that promote the child’s education, health, recovery and social reintegration”, highlighted SRSG Santos Pais.

The Global Study will help to consolidate data and sound evidence to ensure that children deprived of liberty are counted for and visible in the development of policy and law. It will promote capacity-building initiatives for professionals and a change in stigmatizing attitudes and behaviour towards children in detention. ASEAN representatives expressed strong interest in this process and their support to the Global Study’s development.

The regional meeting also provided special attention to the process of implementation of the UN Model Strategies and Practical Measures on the Elimination of Violence against Children in the Field of Crime Prevention and Criminal Justice, adopted in 2014 by General Assembly resolution A/RES/69/194. Comparative experiences from Europe, Latin America, Australia and India were shared in order to review and reinforce the implementation of the Model Strategies within the juvenile justice system.

Similarly, the meeting reviewed the priority actions identified by the ASEAN Regional Plan of Action on Elimination of Violence against Children in the field of juvenile justice, including the promotion of child friendly justice for children, the prevention of deprivation of liberty and the promotion of non-custodial alternatives, including restorative justice. Important reflections were also held on cross-border safeguards for children involved with the justice system.

The Asia-Pacific Council for Juvenile Justice Subcommittee for ASEAN is a regional network which gathers representatives from public administrations, the judiciary, universities and civil society actors across 16 countries in the region. This second meeting was held in June 15 to 17 and organized in cooperation with the International Juvenile Justice Observatory, ASEAN Commission on the Promotion and Protection of the Rights of Women and Children (ACWC), the Thai Institute for Justice and the Ministry of Justice of Thailand.