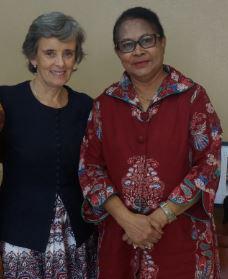 Jakarta, Indonesia 27 February 2015 - During her visit this week to Jakarta, Special Representative of the UN Secretary-General on Violence against Children, Ms Marta Santos Pais, congratulated the Government of Indonesia for addressing violence against children in its new National Medium Term Development Plan (2015 – 2019).

“Violence against children is a global phenomenon. It happens in all countries and in all groups of society - including in Indonesia. It’s often hidden in plain sight, and in many cases socially condoned,” Ms. Santos Pais said.

Santos Pais urged the Government to put in place strong mechanisms to ensure effective implementation of the RPJMN goals and clear accountability and monitoring, and to allocate an adequate budget across all sectors to prevent and respond to violence against children in the country.

She also expressed her hopes that Indonesia would be a champion for elimination of violence against children to be at the heart of the new Sustainable Development Goals (SDGs). The draft SDGs include a number of targets aimed at eliminating violence against girls and boys including harmful practices such as child marriage and female genital mutilation.

“I would like to invite Indonesia to take on a leading role and be a lighthouse in the region when it comes to shaping policies and the overall agenda to end violence against children,” she said.

In order to achieve this, Santos Pais recommended the finalization of a National Strategy and Action Plan on violence against children, highlighting that 90 countries across the globe already have such dedicated strategies and national action plans in place. Key to its success would be to involve young people in the development and implementation.

The SRSG further welcomed that Indonesia already outlawed various forms of violence against children including violence in institutions, in the community and in schools. She however noted that legislation currently does not explicitly prohibit all forms of violence, including corporal punishment within the home. She urged the Government to join the group of 45 countries whose legislation includes a complete prohibition of violence against children in all forms.

Referring to lessons learned from other countries, Santos Pais stressed the need to initiate a broad public debate about the negative impact of violence against children. “In Sweden, for instance, which was the first country to outlaw violence against children in 1979, the new legislation was accompanied by intensive discussion across the country to raise awareness and facilitate the understanding of families and communities how violent behaviour towards children can be prevented. Further to this, families need support to learn how to adopt positive parenting practices that don’t use violence to discipline children,” she said.

No nationwide data on the extent of violence against children is available in Indonesia. Existing evidence however indicates that violence is a hidden reality in the lives of many of the more than 80 million children in Indonesia.

According to the Global School-based Student Health Survey from 2007, around 40 per cent of students aged 13-15 reported having been physically attacked by peers in the previous 12 months at school, one of the highest reported rates in the world. Half of all children surveyed reported bullying at school, while 56 per cent of boys and 29 per cent of girls in institutions – including orphanages, rehabilitation centres, boarding schools and correctional institutions – reported to have experienced physical abuse. However, only few of the children who become victims of abuse seek professional help.

During her mission to Indonesia, which started on Monday, SRSG Santos Pais exchanged views with Parliamentarian Ledia Hanifa, had meetings with Minister of Social Affairs Khofifah Indar Parawansa, Minister of Women’s Empowerment and Child Protection Johana Susana Yembise and Minister of National Development Planning Andrinof Chaniago. She also participated in a roundtable discussion on violence against children with representatives of the Ministry of National Development Planning, gave a talk at the University of Indonesia and engaged with civil society and youth organizations.