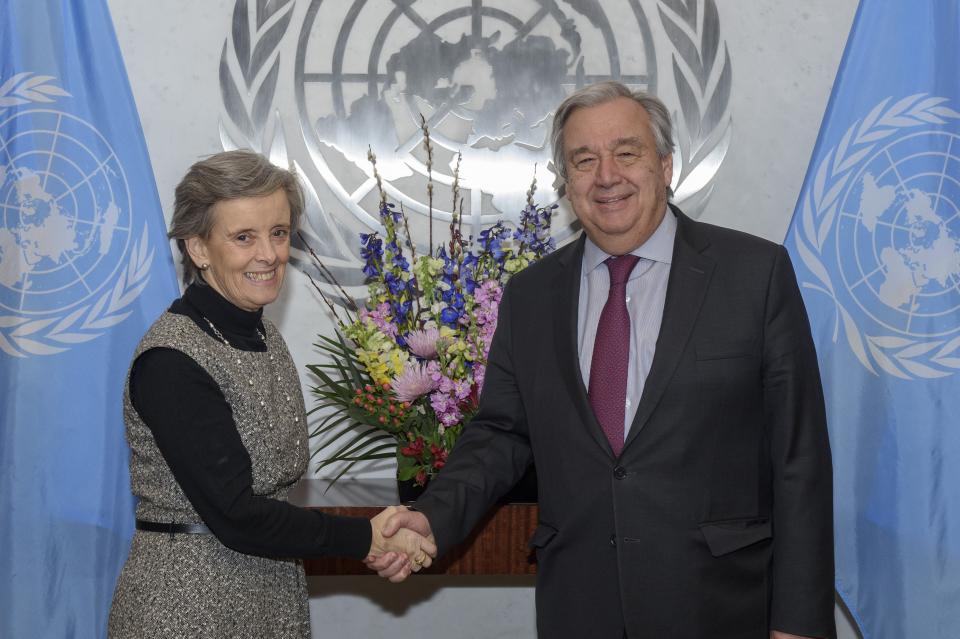 New York, 20 February 2018 - UN Secretary-General Antonio Guterres was briefed today by his Special Representative Ms Marta Santos Pais, on global progress towards ending violence against children. During the briefing, the SRSG highlighted 2019 as a year of strategic opportunities to help build a world free from violence, including the 30th anniversary of the UN Convention on the Rights of the Child in November, and the reviews of the 2030 Agenda for Sustainable Development at the High-Level Political Forum in July and the General Assembly Summit in September.

“The Secretary-General has long been a committed and powerful advocate for the rights and wellbeing of children and I was pleased to be able to update him on important progress and achievements made towards strengthening their protection from violence, as well as upcoming opportunities to accelerate action” said SRSG-VAC Santos Pais. “The 2030 Agenda pledges to leave no one behind, and the best way to avoid leaving children behind - and to achieve the 2030 Agenda’s vision of a world free from fear and violence - is by placing children first in all our collective efforts. The 2030 Agenda has a specific target (16.2) to eliminate all forms of violence against children and the United Nations is promoting accelerated action towards its achievement” she added.

The Secretary-General heard from the SRSG of significant progress made towards the elimination of violence against children over the last 10 years, including that 98 countries now have a national policy agenda on violence prevention and response (double the number of countries in 2009) and 60 countries have enacted comprehensive legislation with an explicit prohibition of all forms of violence (three times the number of countries compared to 2009). She also noted the consolidation of data and research on violence against children, including 20 countries in Asia and Africa that have conducted comprehensive household surveys on children’s exposure to violence. This research is being used to guide evidence-based policy agenda on violence prevention and response.

“This year marks the 30 year anniversary of the adoption of the Convention on the Rights of the Child and we are redoubling our efforts with partners and allies around the world to realize its vision of a world where no child lives with violence. New strategic alliances are being created and existing partnerships strengthened within and beyond the UN system, including regional organizations, civil society, faith-based groups, professional associations, academia, private sector and individuals from all walks of life. In all our efforts, we must also work closely with children, who are crucial agents of change and who share effective and creative solutions to end violence” continued SRSG-VAC Santos Pais.

The SRSG highlighted to the Secretary-General the opportunities presented in 2019 to promote children’s protection. “Empowering people and ensuring inclusiveness and equality is the theme of the UN High-level Political Forum in July: I believe progress for children is an essential indicator of achievements in social inclusion and equality. The HLPF will also be reviewing three SDGs with targets directly related to ending violence against children. Indeed, we could rightly call this year’s review the “children’s HLPF” added the SRSG.

“Then in September, the UN General Assembly will review implementation of the whole of the 2030 Agenda for Sustainable Development, including SDG target 16.2. These two key milestones along with the anniversary of the CRC provide a unique opportunity to promote further action for the protection of children. We can assess how far we have come in ensuring children’s safety and protection; what gaps remain, and how to best accelerate progress to end all violence against children by 2030,” concluded SRSG-VAC Santos Pais. “By joining hands and working together, we can ensure that zero becomes humanity’s favorite number – zero violence against children."