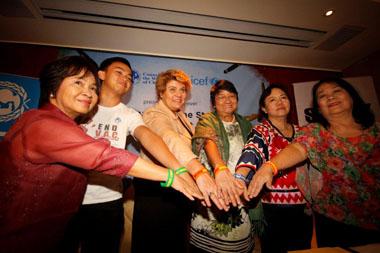 New York, 6 December 2016 - SRSG Santos Pais welcomes the release of the first national survey on violence against children by the Philippine Council for the Welfare of Children and UNICEF. Though deeply saddened by the details of the data, which reveals that 8 in 10 children in the Philippines suffer some form of violence in childhood, the SRSG commends the Government for conducting this ground-breaking survey and committing to a policy response.

“This study is yet another outstanding example of how research can bring to light the hidden reality of violence in children’s daily lives and it lays the foundation for the development of an evidence-based national plan of action to address the issue”, said the SRSG.

As with other Violence against Children Surveys conducted in the region and beyond, it highlights that children suffer most at the hands of those who are supposed to care for and protect them. They are often frightened and do not know where to seek help and support; and if they do report their experiences and seek advice, help is not always at hand.

The National Baseline Study conducted among 3,866 respondents, aged 13 to 24, from 17 regions across the Philippines was launched on December 6 in the capital Manila and found that 60% of physical violence suffered by children, and 38% of psychological violence, happen in their homes, with boy victims outnumbering girls. One in five children in the Philippines have been sexually violated, with the data also revealing that the Philippines has emerged as a center for online abuse of children, with the demand making sexual abuse images of children a business in the country.

“This very comprehensive research shows that the elimination of all forms of violence against children should be a core indicator of national social improvement and sustainable development. It should be a reference for all government sectors and departments, and a call to action for better budgeting and improved coordinating mechanisms, with a clear monitoring and evaluation plan to assess progress and maintain momentum to achieve the 2030 Agenda targets on violence in the Philippines, especially SDG target 16.2” added SRSG Santos Pais.