Statement by the Special Representative of the Secretary-General on Violence against Children, Marta Santos Pais, on the occasion of the 25th Anniversary of the Adoption of the Convention on the Rights of the Child 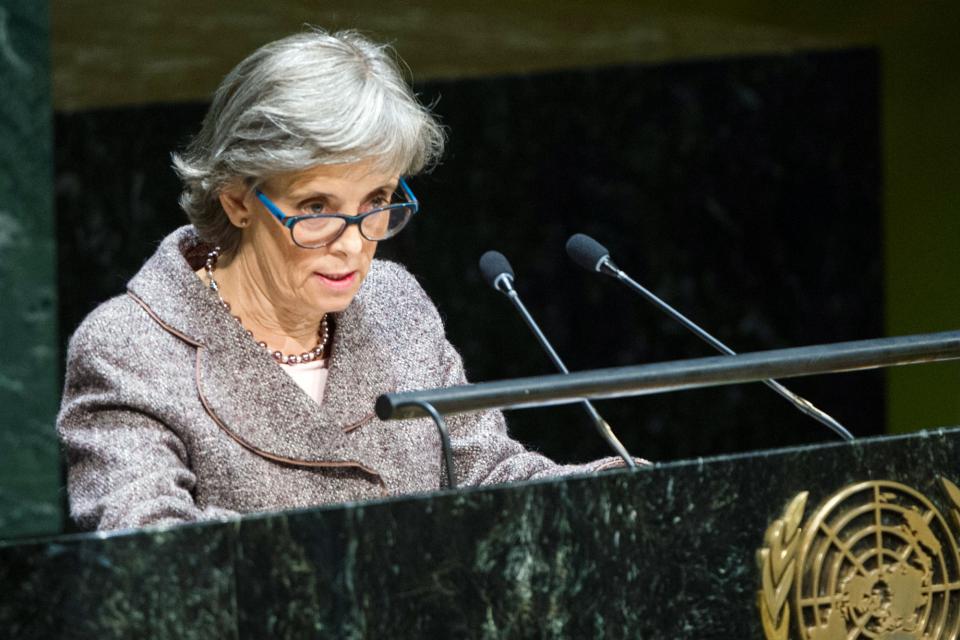 New York, 25 November 2014 - Statement by Marta Santos Pais, Assistant Secretary-General and Special Representative of the Secretary-General on Violence against Children, at the High-level meeting on the occasion of the twenty-fifth anniversary of the adoption of the Convention on the Rights of the Child.

It is with deep emotion that I am participating in this important commemorative session. I was here, in this very hall of the General Assembly, 25 years ago, witnessing the formal adoption of the Convention on the Rights of the Child.  This was a moment of immense joy, celebrating the groundbreaking result of a long negotiation process in which I had the privilege to participate. I recall how we had been influenced by the spirit of the great Polish pediatrician Januzs Korczak encouraging us to place children first and above legal, political, social and economic differences, and recognizing children as citizens of today and as true agents of change. The Convention reflects this vision and entrusts us with a compelling mission: to spare no effort to translate its provisions into a tangible reality for all children, everywhere, at all times.

25 years later, I have the honor to address you and reflect whether the world we then imagined has become reality.

My mandate exposes me to the worst and to the best of humankind. The worst is certainly the countless children exposed to violence, often in a pervasive, hidden and concealed manner.

The children intentionally targeted in politically driven processes, manipulated in organized crime, sold and exploited for economic gains, groomed on line, disciplined through violent means, sexually abused in the privacy of their homes, neglected in institutions, bullied in schools, stigmatized and ill-treated as a result of superstition or harmful practices… Every five minutes a child dies as a result of violence…

Children’s pervasive exposure to violence is well documented by UN reports, academic evidence and children’s heartbreaking stories which all convey a pressing sense of urgency.

For millions of children around the world, life is defined by two words: FEAR and PAIN. For them, the world has no safe haven. And nations are missing the chance to build a better world for all.

The Convention recognizes the right of the child to freedom from violence. Yet, only10% of the world’s children are protected by national legislation prohibiting all forms of violence, including within the home.

In early childhood, the impact of violence is often irreversible. As children grow, the cumulative exposure to manifestations of violence becomes a continuum, spreading across children’s life cycle and, at times persisting across generations.

Beyond the impact on individual victims and their families, violence is associated with far-reaching costs for society. It diverts billions of dollars from social spending, slowing economic development and eroding nations’ human and social capital.

Can we then say that the world is a better place for children?

Since 1989, the world has made tremendous strides towards the realization of children’s rights. The Convention has triggered decisive improvements in national laws, in the set-up of institutions for the protection of children’s rights, in the development of child-centered policies and child friendly services. The voice of children is being given incremental importance and influencing policy making. Thanks to the Convention, we have better trained professionals, we witness the emergence of sound evidence on matters affecting children and we see a positive change in behaviors and attitudes towards children. Progress across countries is showing that violence is not inevitable and can indeed be prevented and eliminated.

Thanks to these efforts, children are safer, healthier, better educated and more empowered. But this better world is not good enough. Children’s ambition is to help build a world as big as their dreams.

If we want to fulfill this aspiration, we need to accelerate efforts and make sure that the ethos of the Convention inspires the way in which we all design the world. And the best way to succeed is to be with children at the drawing table!

My mandate also exposes me to the best of humankind. And the best comes, not surprisingly, from children themselves. Time and time again I meet child victims emerging from the worst of nightmares and yet resilient, confident, generous, and showing us, adults, the way ahead. In all regions of the world, young advocates join hands with national authorities, civil society and many other allies in raising awareness about the detrimental impact of violence and empowering young people to be the first line of protection from the risk of abuse and exploitation.

Even in the most desperate of situations, children reveal hope for a better world and determination to achieve lasting change. It’s much more than just positive thinking. It’s about positively achieving.

In this year of commemoration of its 25th anniversary, we have a golden opportunity to make the Convention center stage and promote a quantum leap in children’s protection from violence. Placing the elimination of violence against children in the Post-2015 development agenda can indeed bring us there!

One thing is clear: The elimination of violence cannot be a dream of a few, it needs to become a cause for all! And I remain fully committed to this endeavor!

Children’s Rights are more than a set of articles. The vision of the Convention will not be fully realized unless children’s rights become one of the pillars that sustain society and are embraced as a core value for the dialogue between generations.

A better world for children is simply not good enough, we need to aim at its perfection!

Thank you for your attention"