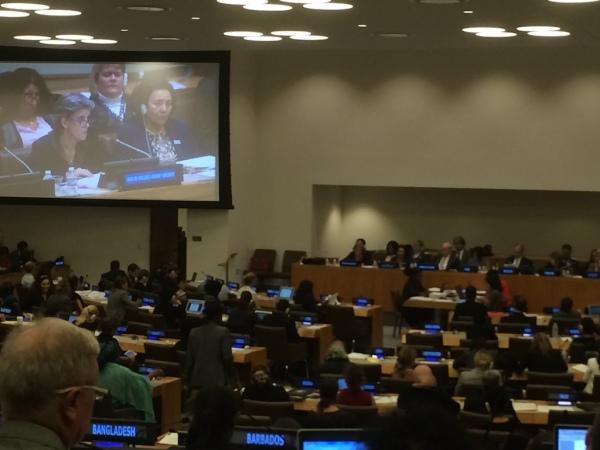 New York 15 October 2014 - SRSG Santos Pais presented her annual report in an interactive dialogue with the Third Committee of the UN General Assembly.

"25 years after its adoption, the CRC is as relevant as it was in 1989. Despite important progress achieved in many regards, fear and pain continue to haunt the lives of millions of children. For these children, the convention is a broken promise." - she said.

The SRSG welcomed significant recent developments, including the adoption of the United Nations Model Strategies and Practical Measures on the Elimination of Violence against Children in the Field of Crime Prevention and Criminal Justice. At the national level, visible progress has been made in legislation to prohibit all forms of violence against children, including corporal punishment within the home, most recently by Malta, Bolivia, Brazil and Argentina. At the same time, there are persisting challenges, including the growing incidence of child abuse and neglect and domestic violence as a result of austerity measures, and the acts of torture, stigmatization and discrimination of vulnerable children, including children with albinism and accused of witchcraft.

SRSG Santos Pais called for the inclusion of violence against children as a priority and cross cutting concern in the post-2015 development agenda. "Freedom from violence is indispensable to a sustainable future in which children are able to grow up healthy, well-nourished, confident, resilient, well-educated, culturally sensitive and protected from abuse, neglect and exploitation. By investing in children, we will secure equity and social progress for all members of the human family," she added.

Member States participating in the dialogue expressed strong support to the mandate, welcoming the SRSG's field visits and her cooperation with regional organisations . Statements underlined the importance of violence prevention, including through education, information and child friendly communication, as well as the need to address manifestations of violence in various settings, such as the school environment and the justice system.