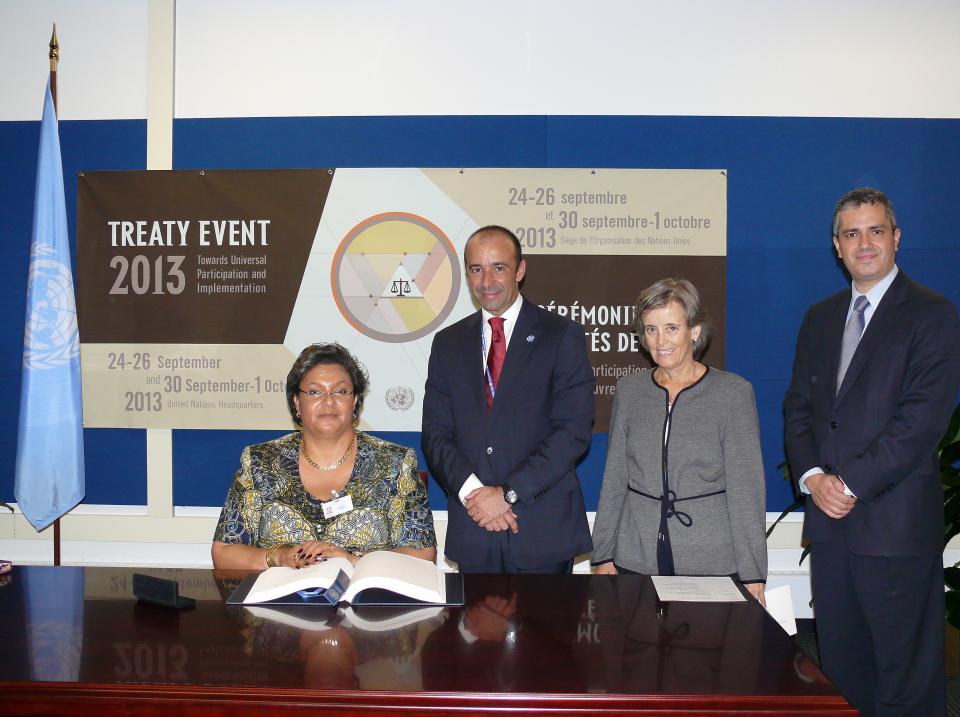 New York, 24 September 2013 - The 2013 UN Treaty places a special emphasis on the Convention on the Rights of the Child and its Optional Protocols.

SRSG Marta Santos Pais welcomed today the ratification of the Optional Protocol to the Convention on the Rights of the Child on the Sale of Children, Child Prostitution and Child Pornography, by the Russian Federation. Mr. Sergey Lavrov, Russian Foreign Affairs Minister, deposited the instrument of ratification in the presence of SRSG Santos Pais during the first day of the UN Treaty Event.

“The Government of the Russian Federation is to be congratulated for the expression of its commitment to protect children from violence and prevent their exploitation as victims of sale, prostitution or pornography,” said the SRSG.

This ratification builds upon the call made by SRSG Santos Pais during her mission to Moscow, in November 2011.

Montenegro and Portugal ratified the third Optional Protocol to the Convention on the Rights of the Child on a Communications Procedure. Benin, Côte d’Ivoire, Ghana, Guinea-Bissau and Seychelles signed this important treaty.

The Optional Protocol on a Communications Procedure allows children to bring complaints to the United Nations Committee on the Rights of the Child on the violation of their rights.

Since the adoption of the third Optional Protocol by the UN General Assembly, on 19 December 2011, the process has gathered significant momentum with eight State parties and 41 signatory States and a wide public support expressed by international and regional organizations and civil society.

SRSG Marta Santos Pais called for the rapid entry into force of the Protocol. This year’s Treaty Event can mobilize other States toward ratification of the third Optional Protocol to the UN Convention on the Rights of the Child.

The UN Treaty event, held on the 24, 25, 26, 30 September and 1 October, is an opportunity for Member States to sign or ratify these important child rights treaties.