Justice for children aims to ensure that all children, irrespective of their status, are served by the justice system in their best interest and in accordance with international norms and standards.

Every year, millions of children come into contact with the justice system. The reasons may be different: they may be involved in criminal justice proceedings due to being in conflict with the law, or because they witnessed or became victims of crimes, or a combination. Moreover, children may be involved in civil and administrative law systems that directly affect them, such as in custody, adoption or migration proceedings, or may have recourse to the justice system to claim redress for rights that have been violated or denied. Regardless of the reason, interaction with the justice system can be an intimidating experience for children.

The juvenile justice system should operate on a belief that intervening early in delinquent behavior will deter adolescents from engaging in criminal behavior as adults, and the focus should be on rehabilitation and reintegration into society rather than punishment. Children’s offending behavior may be triggered by several interrelated factors, such as exclusion, marginalization, and violence within and outside the family. In some cases, it may simply be part of a child’s development since most children desist from such behavior as they become adults. For these reasons, international standards require states to prioritize early prevention by providing support through social welfare systems to families and children to address the root causes of criminal behavior and thus minimize children’s contact with the criminal justice system.

When children are in conflict with the law, international standards are clear: children must be treated in a manner consistent with the promotion of the child’s sense of dignity and worth; diversion from formal proceedings should be the preferred option; and detention must be used as a measure of last resort and for the shortest possible period. Moreover, children should have access to a lawyer and, if judicial proceedings are unavoidable, must be guaranteed a fair and speedy trial.

While there has been progress in reforming justice systems, in many countries they are still not adapted and responsive to the specific vulnerabilities and needs of children. Even though detention of children is supposed to be a measure of last resort, it is often used as the first resort. In contradiction to international law, many children face justice proceedings or are held in detention at a very young age and/or for minor, non-violent or even status offences1, on the grounds of migration, or mere association with armed forces.

At the hands of police without specialized training, or while in detention, children may be at increased risk of violence and ill-treatment, as well as violence from peers or adult detainees. Moreover, overcrowding or dire conditions of detention seriously harm their physical and mental well-being. While girls account for the smallest percentage of children in detention, they have specific vulnerabilities and needs that justice systems may be unable to respond to.

Upon serving their sentence, children face stigma and exclusion and sometimes are pushed back to prisons. In contrast, early prevention, whole-system and multi-disciplinary approaches, staff specialization and training, regular monitoring, and well-resourced diversion and restorative justice programmes have proven to be effective in securing better outcomes for children, as well as for society.

In a similar vein, justice systems should respond to the specific needs of child victims and witnesses of crimes, as well as children participating in civil and administrative disputes. However, the absence of child-friendly

environments and approaches may further harm children leading to their secondary victimization. Availability and accessibility of psycho-social rehabilitation services remains a challenge in many countries further delaying the healing of trauma children may have experienced.

Children in vulnerable situations and belonging to minorities, including LGBTQI and children with disabilities, irrespective of their status in the proceedings, face even greater challenges, discrimination and heightened risks of violence within the justice system.

Functional and accessible justice systems play an important role in protecting children’s rights and holding perpetrators of violence against children accountable, but they also serve as the main avenues to overcome deprivation, social exclusion and redress for violation of their rights. To promote the strengthening of justice systems, the Special Representative together with several other United Nations entities and civil society organizations, under the umbrella of SDG 16+, launched Justice for Children, Justice for All Call to Action. This initiative calls for justice in all its forms to meet the rights, needs and opportunities of children, including in the criminal and civil justice system, as well as economic, social and cultural justice.

CRC General Comment No. 24 (2019) on children’s rights in the child justice system.

Prevention and Responses to Violence against Children within the Juvenile Justice System. Publication produced by the Office of the SRSG VAC in 2012; https://violenceagainstchildren.un.org/news/prevention-and-responses-vio...

Protection from violence in the justice system 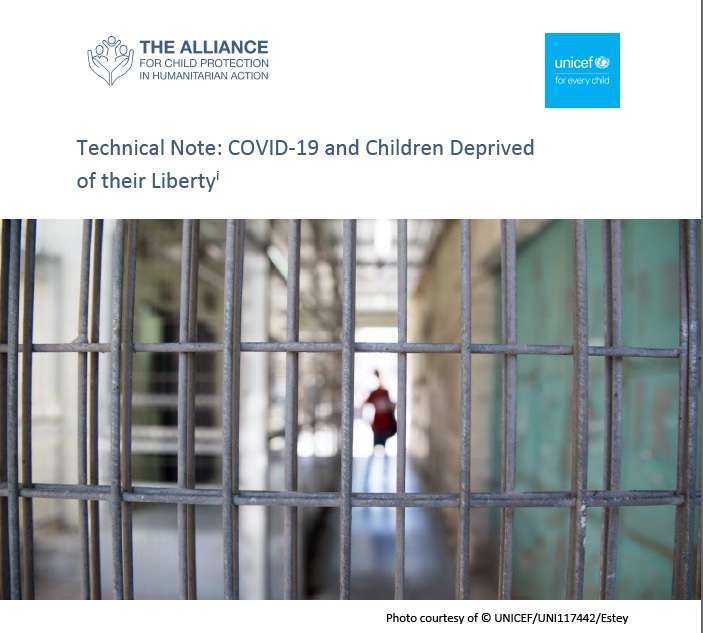 Technical Note: COVID-19 and Children Deprived of their Liberty

In responding to the COVID-19 pandemic, States must ensure that the human rights of every child who is deprived of her or his liberty are fully respected, protected and fulfilled. This includes providing adequate care and protection from harm, including by taking concrete steps to reduce overcrowding in all facilities in which they are detained and ensuring safe placement in non-custodial, family or community-based settings. It also means that all decisions and actions concerning children must be guided by the principle of the best interests of the child, and children’s rights to life, survival, and development, and to be heard. Read more 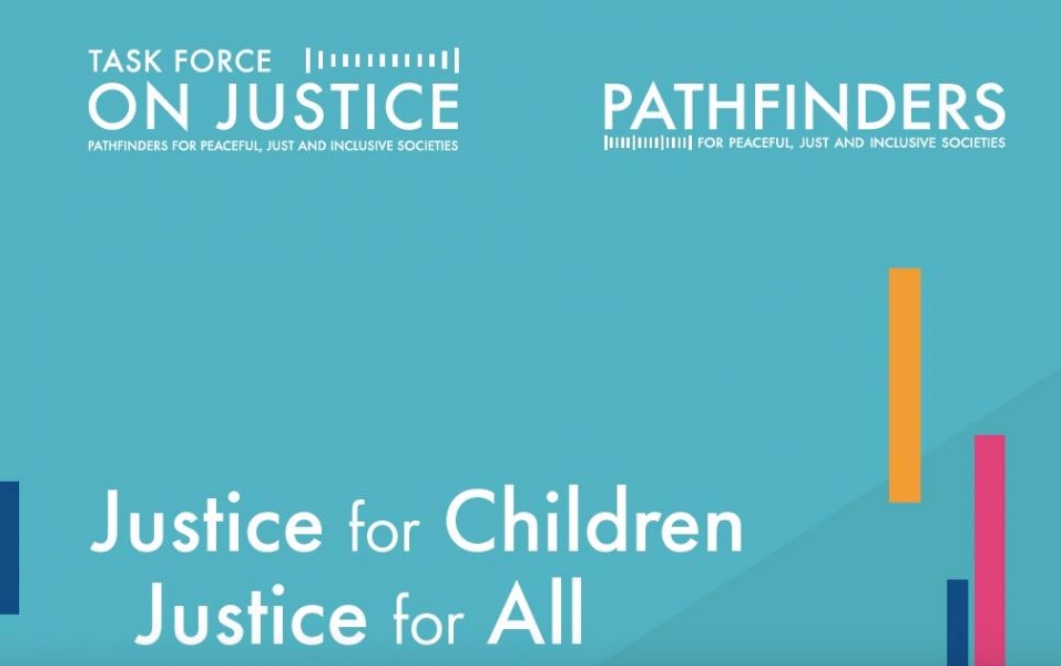 This Justice for Children, Call to Action provides a strategic vision that actively puts children at the centre, affirms children’s rights and promotes their capabilities and opportunities, and vigorously targets the United Nations Sustainable Development Goals. It is explicitly focussed on injecting momentum into the next steps for the implementation of the UN SDG16; the goal to “promote peaceful and inclusive societies for sustainable development, provide access to justice for all, and build effective, accountable and inclusive institutions at all levels.” Read more 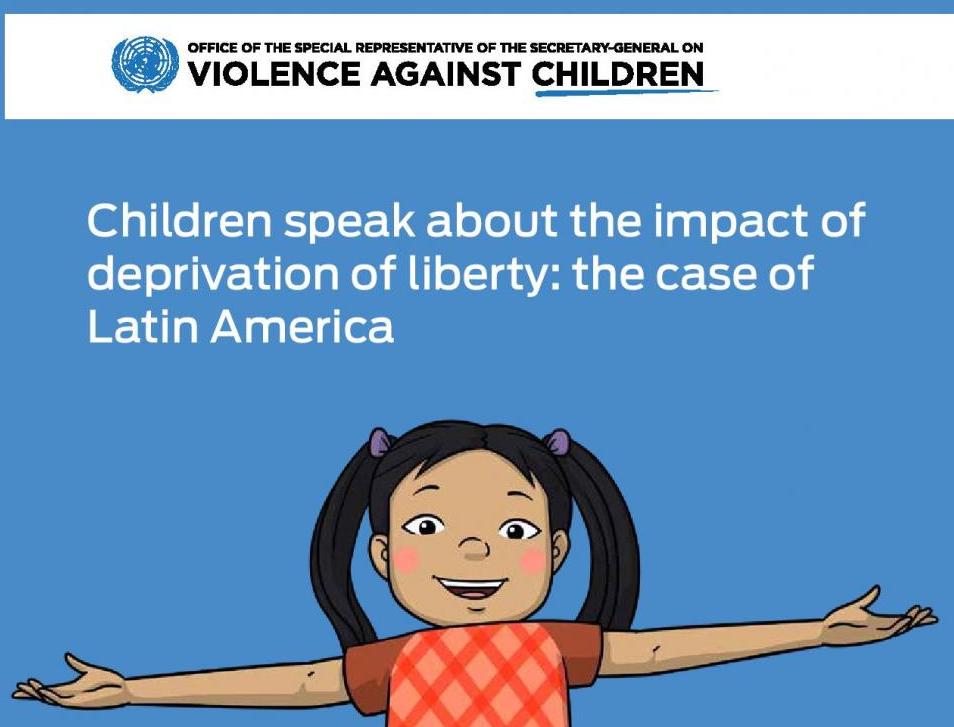 The risk of violence faced by children affected by deprivation of liberty has been a priority for the Special Representative of the Secretary-General on Violence against Children since the outset of her mandate in 2009. In an effort to shed further light on the impact of deprivation of liberty on the enjoyment of children’s rights, the
Special Representative partnered with UNICEF, the Governments of Paraguay and Uruguay and the Latin American and Caribbean Regional Platform for Children with a Parent deprived of Liberty (NNAPEs Platform) to document the views and experiences of children affected by the deprivation of liberty. Read more 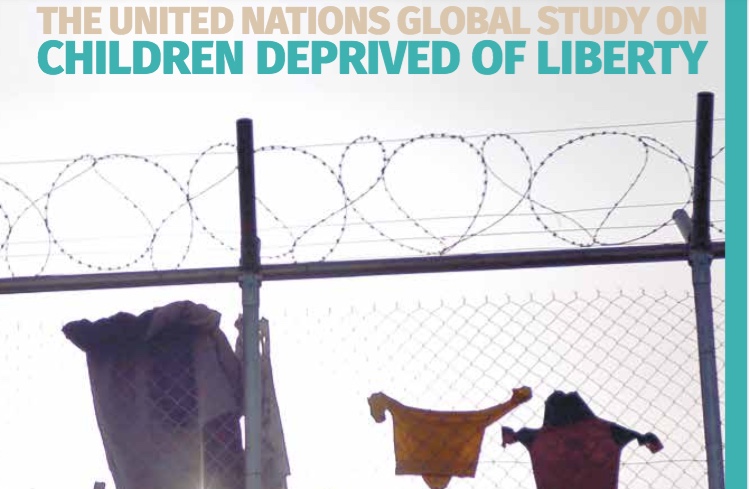 It is our strong hope that this Study will mark a turning point in ending the invisibility and overcoming the vulnerability, stigmatisation and social exclusion of children deprived of liberty. As the research confirms, these children are often neglected by policies and data in countries around the world. Indeed, some of the key findings and recommendations of the Study relate to unavailability of comprehensive data, which is vital to understand the scope of the deprivation of liberty of children globally, as well as to assess the progress made as a result of policy changes. Sadly, the saying that “the ones who are not counted do not count” reflects well the harsh reality of children deprived of liberty. Read more 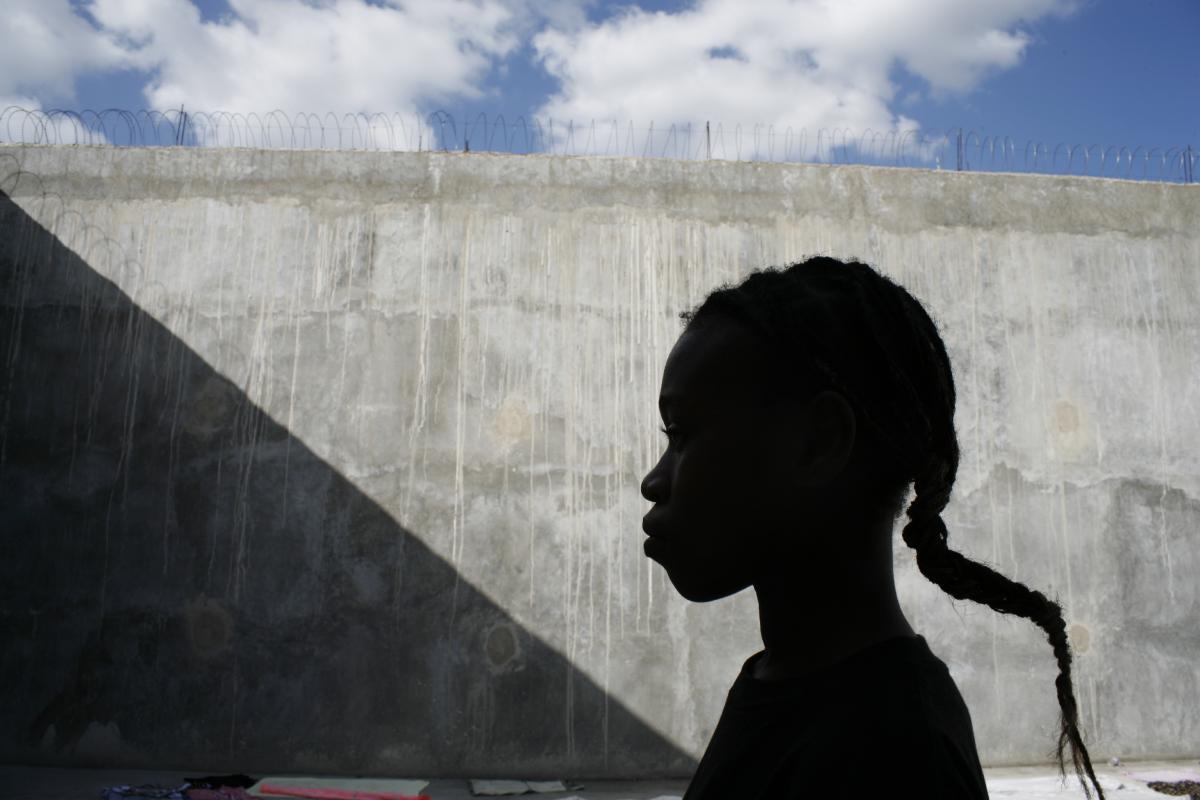 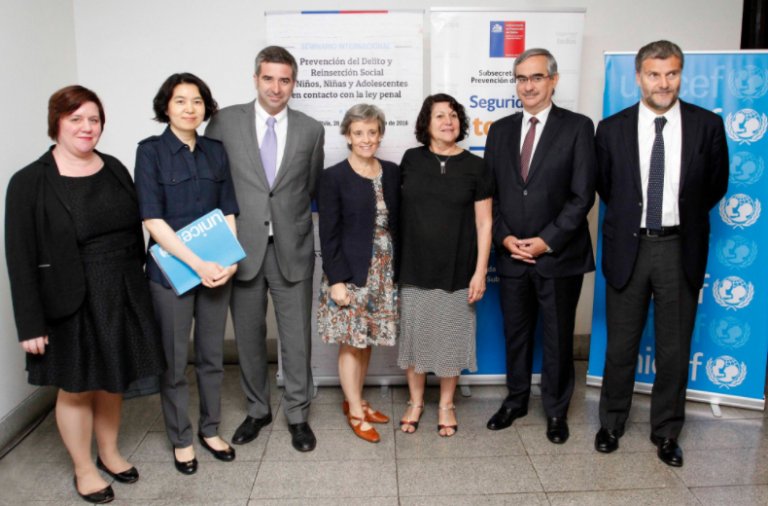 As implementation of the 2030 Agenda starts, countless children are being left behind, including those deprived of their liberty. Considering the need to support the elaboration of the Global Study on Children Deprived of Liberty organised an expert consultation to discuss laws, policies and programs for crime prevention and resocialization of children in contact with criminal justice systems. The debates held at this meeting became a concrete contribution to the UN Global Study on Children Deprived of Liberty and to the design and implementation of crime prevention and reintegration policies in Latin America. Read more

Joint report of the Office of the High Commissioner for Human Rights, the United Nations Office on Drugs and Crime and the Special Representative of the Secretary-General on Violence against Children on prevention of and responses to violence against children within the juvenile justice system presented to the 21th Session of the Human Rights Council, in Geneva - A/HRC/21/25 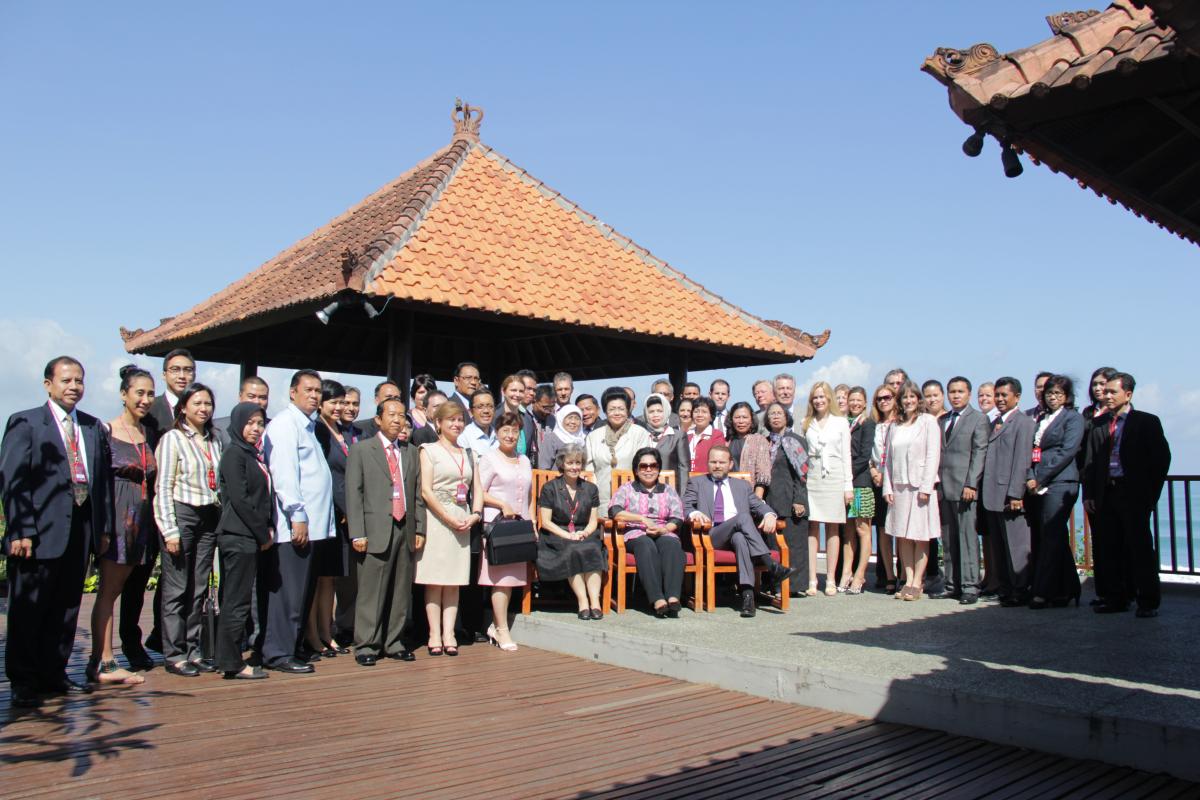 The expert consultation focused on sharing of good legislative, policy and program examples, taking into account possible challenges in countries where law reform and a paradigm shift from punitive approaches to child sensitive restorative justice programs have led to rehabilitation and reintegration of children at community level and providing an overview of available models of restorative justice for children and of legal structures that support such programmes at the national, regional and community levels. Read more

Girls in the Justice system 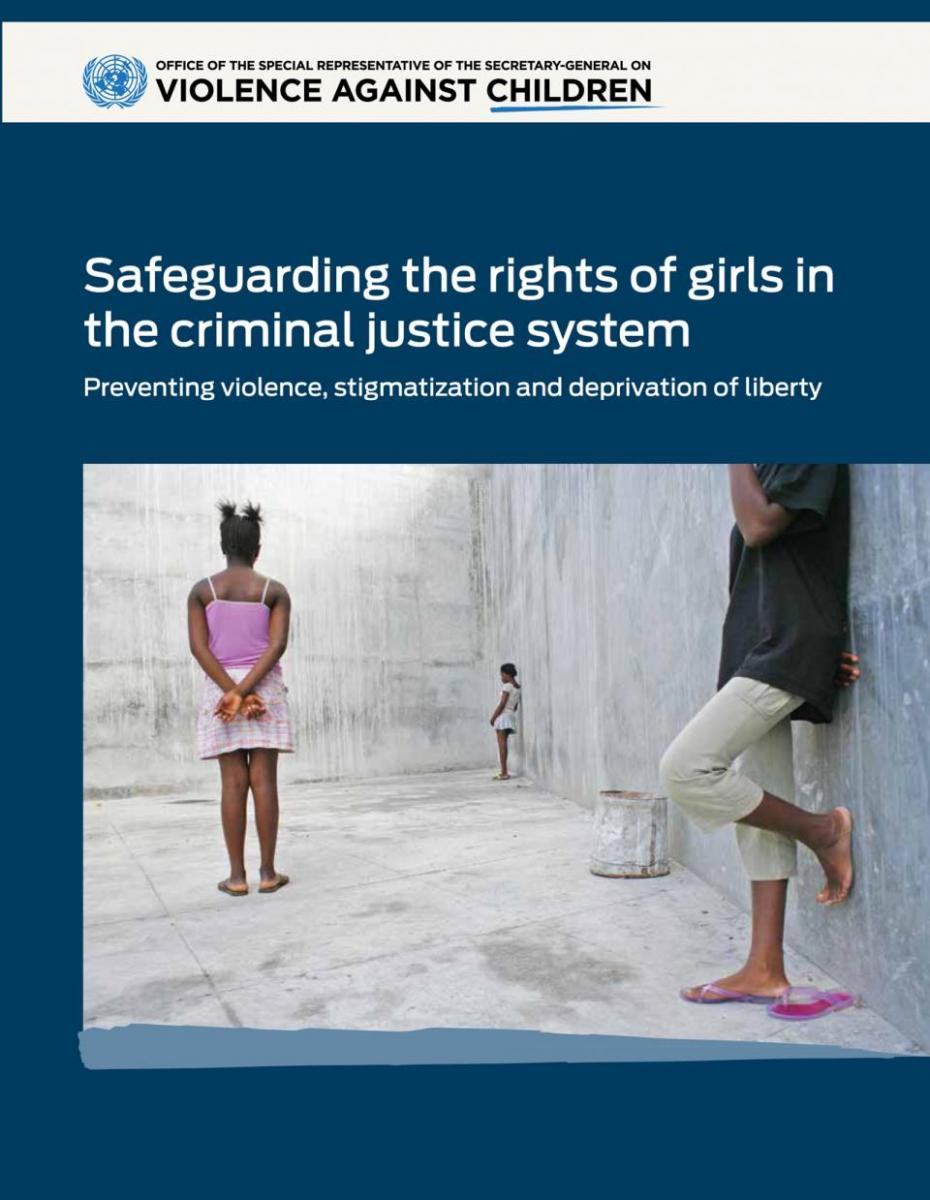 Safeguarding the rights of girls in the criminal justice systemGirls often face significant barriers to accessing justice, whether they are victims of crime, witnesses or alleged o"enders. All too often, legislation and criminal, administrative and civil proceedings are inadequate for the safeguarding of their rights, while appropriate policies for heir protection are absent or poorly implemented.In short, as a consequence of their age and gender, girls face a double challenge when they come in contact with criminal justice systems, a challenge rooted in discriminatory attitudes and perceptions that persist in societies around the world.

In 2014, the General called for a Global Study on Children Deprived of Liberty, highlighting it should be developed taking into account children’s views. To advance work in this area and capture children’s voices and experience, in 2017 the Special Representative joined hands with the Uruguayan NGO Gurises Unidos and the Regional Platform for children with an adult deprived of liberty (NAPPES Platform).  Children from 6 to 17 years of age who have a parent or a guardian deprived of liberty participated in local focus groups held in Argentina, Brazil, Chile, Guatemala, Mexico, Nicaragua, Panama, Dominican Republic, and Uruguay and in a regional consultation held in Dominican Republic. The views of children informed the development of a brochure which addresses the impact of deprivation of liberty on the lives of children and includes children’s recommendations to ensure the protection of their human rights.

Brochure English The voices of children and adolescents who have a mother, a father or a guardian deprived of liberty. A contribution to the Global Study on Children Deprived of Liberty