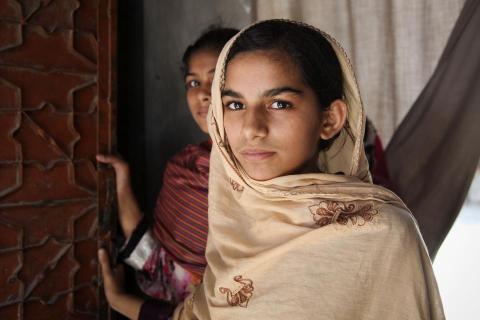 Everywhere in the world girls, especially during adolescence, are at increased risk of forms of gender-based violence, such as sexual and intimate partner violence; trafficking; online harassment and bullying; child, early and forced marriage; and harmful practices such as female genital mutilation.

It is estimated that there are more than 1.1 billion girls under the age of 18 in the world. Adolescent girls are increasingly at the forefront of various initiatives for social change - from the global climate movement to initiatives on promoting education for girls and ending gender-based violence and discrimination. The agency, capacity and strength that girls demonstrate are remarkable. Girls are powerful agents of change who are creating awareness, supporting each other, helping vulnerable communities, demanding change and suggesting solutions for decision makers to achieve social justice, more equity and equality around the globe.

However, while there has been some progress in recognizing and advancing girls’ rights over the last few decades, pervasive gender stereotypes and resultant gender-based violence coupled with discriminatory laws and policies continue to hold them back from fully developing their potential.

Everywhere in the world girls, especially during adolescence, are at increased risk of forms of gender-based violence, such as sexual and intimate partner violence; trafficking; online harassment and bullying; child, early and forced marriage; and harmful practices such as female genital mutilation (FGM). Adolescent girls, whether married or involved in informal relationship, are often subjected to intimate partner violence. Moreover, girls experience higher levels of sexual violence. Survivors of sexual abuse often face stigma and are unable to seek professional support. Moreover, they are at higher risk of experiencing intimate partner violence in their adult life.

With rapid digitalization, girls are increasingly being targeted and harassed online. Information and communication technologies are used to perpetrate gender-based violence through cyber stalking and image-based sexual abuse.

Child marriage, FGM and son preference are among the most prevalent forms of harmful practices that violate girls’ fundamental rights and cause long-lasting harm to their health and well-being. Child marriage limits girls’ educational and future life opportunities; moreover, it increases the risks of complications in pregnancy and childbirth, in some cases even leading to death. Progress achieved in ending harmful practices is not sufficient to keep pace with population growth in those countries where there is a high prevalence of such practices.

Girls in situations of armed conflict, humanitarian crisis and displacement, from ethnic and religious minorities, in migration, especially when unaccompanied and separated, indigenous girls, disabled girls and LBTGI youth face multiple risks of discrimination and are even more prone to violence, therefore more has to be done to create an enabling environment and level playing field for them.

The Convention on the Rights of the Child, the Convention on the Elimination of All Forms of Discrimination against Women, and the Beijing Declaration and Platform for Action require Member States to take all the necessary actions to protect girls from violence and to ensure they can fully develop their potential.

Furthermore, the 2030 Agenda for Sustainable Development includes targets under Goal 5 to eliminate all forms of violence against all women and girls in the public and private sphere, including trafficking and sexual and other types of exploitation and to eliminate all harmful practices, such as child, early and forced marriage and FGM by the year 2030.

Girls’ distinct needs, vulnerabilities and capacities demand specific attention and recognition in policies related to ending violence against children. Addressing inequality and discrimination, investing in girl’s education and creating enabling environment so that girls are empowered to take on their future should be at the heart of violence prevention and response work.

Globally, nearly one in three adolescent girls aged 15 to 19 (84 million) have been the victims of physical, emotional or sexual violence perpetrated by their husbands or partners. Moreover, worldwide around 15 million girls aged 15–19 years have experienced forced sex in their lifetime. The majority of detected victims of human trafficking are females, mainly adult women, but also increasingly girls (23 per cent), most of whom are trafficked for sexual exploitation. Data from some countries suggest that teenage girls are three times more likely to be cyberbullied than boys through online rumor spreading and the receiving of unsolicited explicit images. While in most countries the legal age of marriage is set at 18, globally one in every five girls is married or in union before reaching majority. It is estimated that at least 200 million girls and women across 31 countries have been affected by FGM, though the exact number of girls subjected to this practice is still not fully known.