Albinism and the UN 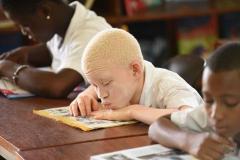 Albinism is a rare, non-contagious, genetically inherited condition which occurs worldwide regardless of ethnicity or gender. It most commonly results in the lack of melanin pigment in the hair, skin and eyes (oculocutaneous albinism), causing vulnerability to sun exposure. Albinism is still profoundly misunderstood, socially and medically. The physical appearance of persons with albinism is often the object of erroneous beliefs and myths influenced by superstition, which foster their marginalization, social exclusion and violence against them.

A major development in recent years is the emerging knowledge and action on the extreme violence against children that is often linked to harmful social norms and persistent myths around albinism.

The appointment of an Independent Expert on the enjoyment of human rights by persons with albinism in 2015 has helped to get the violence and discrimination they face on to the international agenda.

In the resolution that established the mandate of the Independent Expert, the United Nations expressed concern at the attacks against persons with albinism, including women and children, which are often committed with impunity.

Recognizing the need to increase awareness and understanding of the discrimination and stigma faced by persons with albinism, the United Nations General Assembly in resolution A/RES/69/170 in 2014, proclaimed 13 June as International Albinism Awareness Day.

While albinism as a medical condition is not exclusive to Africa, the challenges faced by those living with it are extreme in some parts of that continent, leading the African Commission on Human and People’s Rights to endorse the Regional Action Plan to End Attacks and Related Violations against Persons with Albinism in Africa (2017–2021).

As noted by the Independent Expert in her most recent report to the United Nations General Assembly: “Children [with albinism] in school also face bullying, teasing, discrimination and stigmatization from their peers and teachers alike. Other students may refuse to play with children with albinism, sometimes on the orders of their parents or fueled by pre -existing social prejudices. “

In 2012 the Special Representative launched a thematic report on Protecting children from harmful practices in plural legal systems, with a special emphasis in Africa.

In the publication, the importance of law reform to protect the rights of children with albinism as well as investigation, prosecution and condemnation of perpetrators of such crimes and the adoption of preventive measures that bring these practices to an end, clear legislation and its effective enforcement are urgent to protect the rights of children with albinism. In the report it is also highlighted the importance of a universal birth and death registration system as well as a census may be crucial steps in addressing the challenges faced by children with albinism, although it may also incur the risk of exposing those children to profiteers’ attacks.