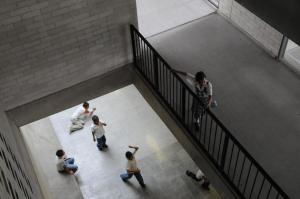 Bullying affects a high percentage of children, compromising their health, emotional well-being and academic work, and is associated with long-lasting consequences continuing on into adulthood. Growing access to information and communication technologies (ICTs) places children at risk of online abuse, increasing their vulnerability to cyberbullying. Online or in person, bullying has a serious impact on both the victim and the perpetrator. Moreover, bullying comes at a high cost to society.
Bullying can be defined as intentional and aggressive behaviour occurring repeatedly against a victim where there is a real or perceived power imbalance, and where the victim feels vulnerable and powerless to defend himself or herself. The unwanted behaviour is hurtful: it can be physical, including hitting, kicking and the destruction of property; verbal, such as teasing, insulting and threatening; or relational, through the spreading of rumours and exclusion from a group.
Bullying usually occurs without provocation, and it constitutes a form of peer violence. Chil-dren who bully often act out of frustration, humiliation and anger, or to achieve social sta-tus, and their actions can inflict physical, psychological and social harm. Children who are bullied are likely to experience interpersonal difficulties, to be depressed, lonely or anxious, to have low self-esteem and to suffer academically, but all actors, including bystanders, and the school climate as a whole are affected detrimentally.
Cyberbullying involves the posting or sending of electronic messages, including pictures or videos, aimed at harassing, threatening or targeting another person. A whole gamut of so-cial platforms, including chat rooms, blogs and instant messaging, are used in cyberbully-ing.
Often resulting from a face-to-face interaction at school, cyberbullying can cause profound harm as it can affect the child victim at any time, quickly reaching a wide audience. Moreo-ver, technology perpetuates cyberbullying threats since messages may be posted and re-posted over time. Bullying and cyberbullying easily feed into each other, forming a continu-um of damaging behaviour.
Online or in person, bullying is among children’s top concerns. Although rates differ from country to country, it is present and widespread throughout the world, affecting a significant percentage of children as victims, perpetrators or bystanders.
The United Nations Study on Violence against Children recognized that bullying constitutes a concern of global relevance. Concerned at the lasting consequences of bullying, parents, educators and policymakers are embracing efforts to prevent and address it. Data on the prevalence of this phenomenon is being compiled and disseminated at an accelerated rate, focused research is being advanced to address it and the attention of the world community is being drawn to the issue as a matter of priority as never before.