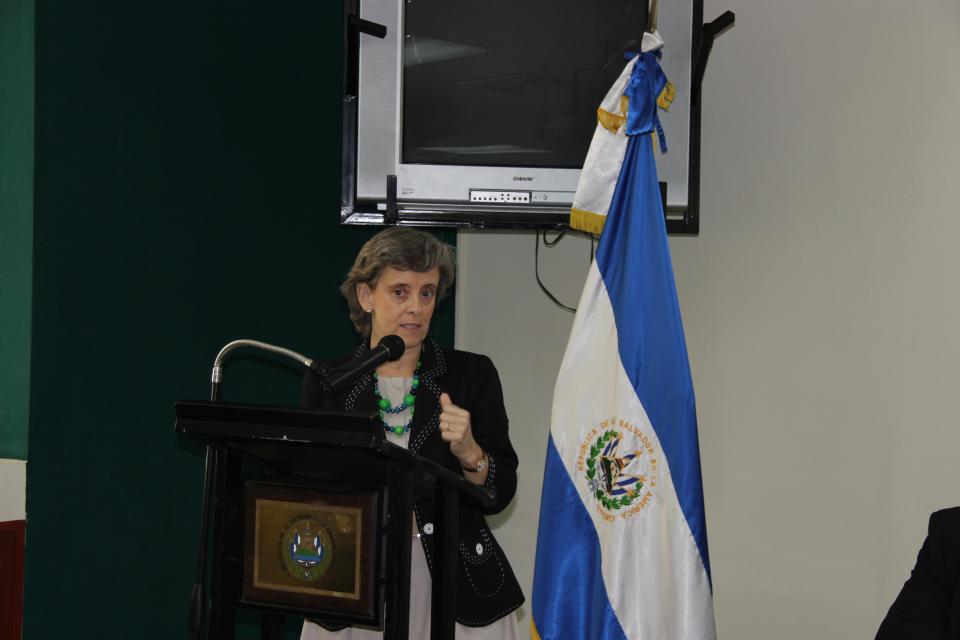 San Salvador (El Salvador) 14 June 2013 - The Special Representative of the United Nations Secretary General on Violence against Children, Ms. Marta Santos Pais, concluded on June 14 her official visit to El Salvador. She recognized significant progress achieved in the country and made recommendations to the State to protect children and young people from all forms of violence as she emphasized “For many children and adolescents in El Salvador life is defined by one word: fear”.

Ms. Santos Pais highlighted positive achievements, such as the adoption of a legal framework to promote a life free from violence for women, gender equality, and the protection of all persons from discrimination; as well as the adoption of the Law for the Integral Protection of Children and Adolescents (LEPINA), accompanied by the progressive establishment of an institutional framework to safeguard a comprehensive and effective child protection system.

She acknowledged the mediation and conciliation measures undertaken by the Office of the General Attorney to solve disputes within the family, as well as, restorative justice initiatives to promote the social reintegration for children involved with the juvenile justice system. Among others, she commended the action of the Human Rights Procurator‘s Office (PDDH) for its advocacy and independent research, including its recent report on the impact of violence on children and young people, as well as the development of youth units for the dissemination of human rights together with other platforms promoted by the PDDH to encourage a participatory process for the promotion of children’s rights.

Important measures have equally been taken in the areas of education, health and labor. These included the significant development of an innovative strategy for inclusive full time schools and the promotion of capacity building initiatives for teachers to address sexual education. She also acknowledged the promotion of a public health approach to the prevention of violence through the establishment of family health community teams (ECOSF) to help to detect cases of violence and child abuse, and promote health services in early childhood.

Despite progress achieved, the Special Representative of the Secretary-General identified challenges that need to be addressed with decisive action by all actors of society. “To face the crisis caused by the magnitude and social indifference to violence against children, it is imperative to develop a comprehensive State policy, based on a long term vision, that goes beyond the action of a single administration and which cannot be restricted to fragmented interventions from different government departments” said Ms. Santos Pais.

“El Salvador needs a cultural transformation and sustainable social investment in children to prevent and address dramatic situations of violence such as homicides and the disappearance of children and young people, child sexual abuse and early pregnancy, and the worst forms of child labor, as well as to eradicate the trivialization of violence against children and to ensure that a priority attention is given to these situations in the policy agenda and in the public debate”. “It is essential to guarantee a safe family environment, and provide support to overcome the trauma caused by violence so that children can face life with a sense of confidence”

She recommended giving visibility to the phenomenon of violence and to its devastating impact on children’s development and on the human capital of the society. “The media plays a crucial role in the promotion of a culture of zero tolerance to violence, in overcoming the stigmatization of vulnerable children and contribute to the sensitization and mobilization of society for the prevention and elimination of violence.” 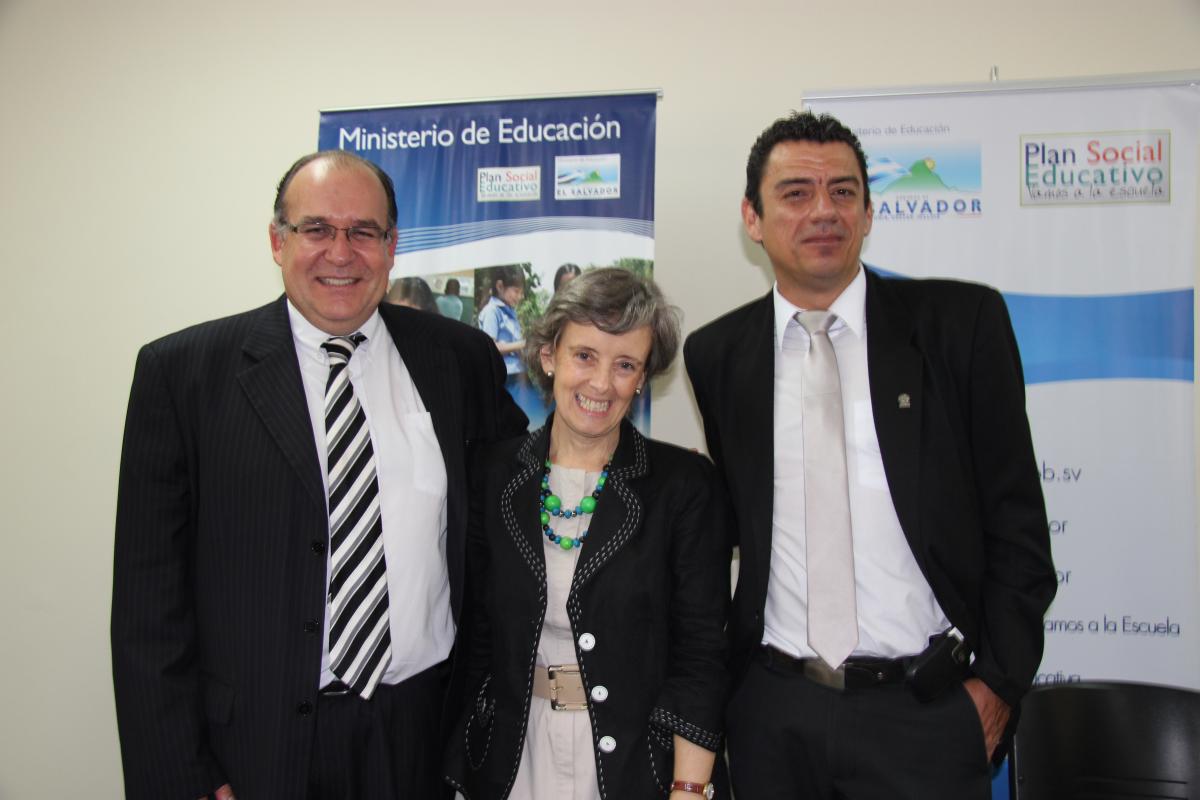 She also urged the State to promote inter-institutional coordination from the perspective of the child, to ensure that everyone can live in a safe environment free from violence. One main concern expressed by children and young people is the insufficient knowledge of the Law for the Integral Protection of Children and Adolescents. In this line, she recommended a wide dissemination of the law and the strengthening of the national legal framework, through the inclusion of an explicit prohibition of corporal punishment and clear standards on the adoption of children in full compliance with the Convention on the Rights of the Child (CRC) and the Hague Convention on the Protection of Children and Cooperation in Respect of Inter-country Adoption. She also encouraged the establishment of child sensitive counselling, complaint and reporting mechanisms for incidents of violence, as well as, the development of an integrated data system to break the silence associated with violence, to inform policy development and to monitor progress and impact. Ms Santos Pais also urged the Government to increase social investment in children and enhance the prevention of violence in early childhood. “It is important to remember that the first years in a child‘s life are essential for the sustainable development of society”, she said. In addition, she recommended increasing three times the budget allocation for education, that currently does not exceed 3.4% of the GDP.

To further strengthen the regulatory framework for the protection of children, the Special Representative encouraged El Salvador to ratify the Third Optional Protocol to the Convention on the Rights of the Child on a communications procedure, to provide confidence to children to seek, effective remedies in case of violation of their rights.

She called for the promotion of child participation in the fight against violence. “Listening to the views and experiences of children is critical to gain a better understanding of the hidden face of violence; and most importantly, to be better equipped to prevent its occurrence, to develop child friendly counseling, complaint and reporting mechanisms, long lasting rehabilitation and reintegration strategies, and to monitor progress and impact of joint efforts, " she said.

In this regard, she echoed the call made by children and adolescents of El Salvador “we want El Salvador to be the happiest country in the world.” To achieve this goal, partnership with children is imperative.

The UN high level representative visited El Salvador to monitor the implementation of the recommendations of the UN Study on Violence against Children, as well as, the follow up given to political commitments made at Meeting of Central American States, held in December 2011, in Santo Domingo. Her visit to El Salvador was conducted at the invitation of the Government of El Salvador and she commended the Government "for having provided support to the organization of a wide range of meetings which helped to hear the voices of a broad spectrum of Salvadorians, State institutions (...), civil society, the private sector, representatives of the diplomatic community and international cooperation, as well as, children and young people from El Salvador; and she underscored the openness of the Government to promote a close cooperation with human rights mechanisms of the UN system.

SRSG Visit to El Salvador - Purpose and context of the visit, significant progresses and persisting challenges and recommendations