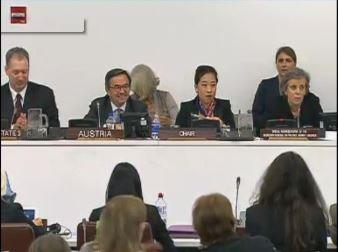 New York 8 October 2012 - The event was co-organized by the United Nations Office on Drugs and Crime (UNODC), the Office of the High-Commissioner for Human Rights (OHCHR) and the SRSG on Violence against Children, with the support of the Governments of Austria and Thailand. The panel discussion was chaired by Her Royal Highness Princess Bajrakitiyabha Mahidol of Thailand, Chairperson of the Commission on Crime and Criminal Justice and counted on the participation of experts from the United Nations, USA and the Council of Europe.

The three UN partners launched a report which was informed by the Expert Consultation on the prevention of and responses to violence against children within the juvenile justice system, held in January 2012 in Vienna.

SRSG Santos Pais presented the main recommendations from the report and emphasized that "the criminal justice system should never be used as a substitute for a weak or non-existent child protection system and that legislation needs to decriminalize survival behaviours, including begging and truancy; and provide social support to children with mental health and substance abuse problems". Furthermore, Ms Santos Pais highlighted the "urgent need for a clear legal prohibition of all forms of violence against children as well as strong accountability mechanisms to prevent violence from occurring, to investigate abuses and to hold those responsible for violence against children accountable".

Mr. Phelan Wyrick, Senior Advisor in the US Department of Justice shared some of the findings from research conducted by the Defending Childhood Initiative, which showed "the devastating effects of violence against children and important programme interventions to provide support to child victims". Ms Anne Brita Normann, Senior Adviser at the Norwegian Ministry of Justice highlighted that "it is not only the gravity of an act and the victim’s want for revenge that should be assessed, but the child’s rehabilitation and re-entry into society".

The last speaker, Ms. Elda Moreno, head of the Gender Equality and Human Dignity Department, Council of Europe stressed that many of the problems denounced in the report launched during the event emerge from the lack of a culture of children’s rights. “We blame children for “anti-social behaviour, for begging or loitering. I can hardly think of anything more anti-social than punishing children for being poor, homeless, hungry, migrant, disabled or victims of exploitation, abuse and neglect”, added Ms. Moreno.