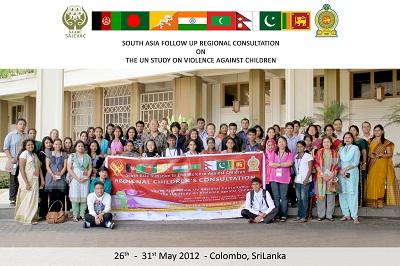 Colombo (Sri Lanka) 30 May 2012 - Special Representative Santos Pais participated in the South Asia Follow Up Regional Consultation on the UN Study on Violence against Children, on 26-30 May, 2012, in Colombo, Sri Lanka. The consultation was organized by South Asia Initiative to End Violence Against Children (SAIEVAC), in collaboration with the Office of the SRSG, and with the support of South Asia Coordination Group on Action against Violence against Women and Children.

In the meeting, government representatives, international and civil society organizations, children and young people representing all eight countries of the region, reviewed the progress made in implementing the UN Study recommendations and identified some persisting gaps in their fight against violence against children.

In her opening statement, the SRSG highlighted the significant efforts carried out in South Asia to raise awareness about the impact of violence on children and to give visibility to this phenomenon in the public debate and in the policy agenda: “Important initiatives have been set in motion to develop a national agenda to prevent and address incidents of violence; and to enact protective legislation to prevent violence in the context of work, to prevent sexual exploitation and trafficking in children, and to prohibit the use of violence in schools; but the sense of urgency of our cause has not diminished”, she added.

In their national reports, representatives of South Asian Governments recognized that serious efforts are still needed to strengthen legislative frameworks, law enforcement and implementation. In addition, some persisting challenges, such as early marriage, require further attention and multidisciplinary and multi-sectoral responses, as well as the involvement of communities concerned.

The “South Asia Call for Action on Ending Violence against Children, adopted by the meeting, highlights the importance of enacting and implementing national plans of actions to integrate the recommendations of the UN Study and SAIEVAC’s own five-year Workplan, as well as developing a baseline for measuring progress made; and it calls for strengthened laws, policies and standards to prevent, mitigate and respond to violence against children, and for mechanisms and services that are accessible to all children. The need to address social norms and practices that are harmful to children is equally acknowledged.

“With the sound normative foundation provided by the Convention on the Rights of the Child and its Optional Protocols, and using the recommendations of the UN Study on Violence against Children together with the SAIEVAC five year work plan as a strategic navigation chart, this regional consultation was a crucial opportunity to accelerate progress in children’s protection from violence!” the SRSG concluded after two days of intense discussions. She reiterated her support to the important process promoted in South Asia and encouraged all the participants to move beyond rhetoric into tangible implementation.