SRSG joins launch of Study on Violence against Children in Malawi 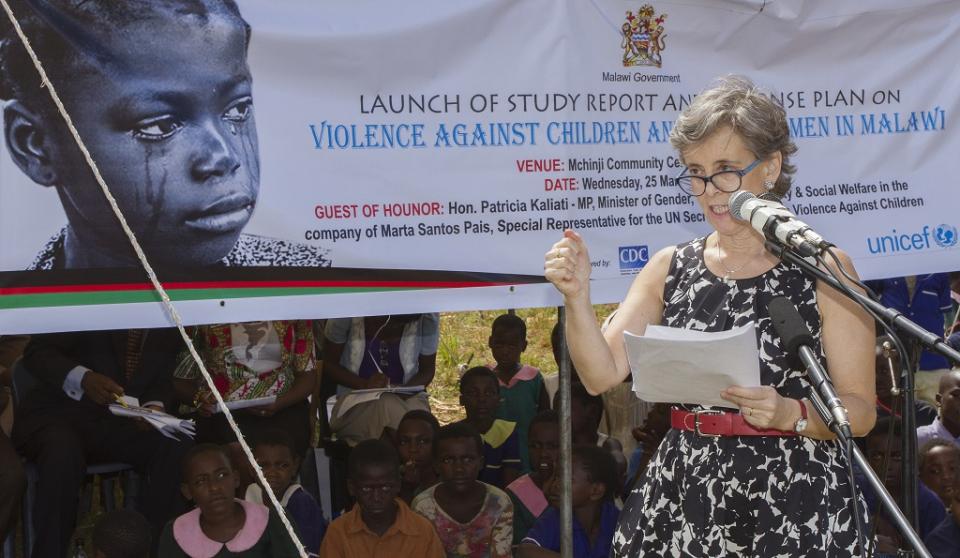 Lilongwe, Malawi. 25th March 2015– 2 out of every 3 Malawians experience violence in childhood, 1 in every 5 girls were sexually abused before they celebrated their 18th birthday, and nearly 2 out of every 3 boys suffered physical violence before the age of 18, a violence against children and young women study launched today has revealed.

The lack of studies on violence against children and women in Malawi has been a major barrier towards effective action to combat the problem.  Currently on official visit to Malawi, the SRSG Santos Pais exhorted the government to use this new data to better prevent violence and protect children:

“I encourage the Government to integrate the findings from the research into its overall policy agenda and build on this productive cross-departmental collaboration. The elimination of all forms of violence against children must be a core indicator of national social development. It should be a reference for all government sectors, for the budget and for relevant coordinating mechanisms, with a clear monitoring and evaluation plan, including independent reporting to Parliament, to assess progress and maintain momentum”.

The findings of the research are contained in a study funded by DFID and conducted by the Ministry of Gender, Children, Disability and Social Welfare, the Center for Social Research at the University of Malawi, UNICEF Malawi and the Centers for Disease Control and Prevention.  The focus groups were 18-24 year old Malawians (establishing how often children are abused during childhood) and 13-17 years olds (establishing how children were abused in the past year).

“It is sometimes too easy to get bogged down in percentages and rates of abuse resulting in desensitization of the sheer number of children who have suffered violations. 7 percent of girls suffering forced or pressured sex during their childhoods means that approximately 315,000 girls were defiled. 6.5 percent of boys being physically abused to the point that they suffered broken or permanent injury equates to nearly 300,000 victims.  Every child has a right to enjoy a safe and protected environment both at school and home,” said Mahimbo Mdoe, UNICEF Country Representative for Malawi.

According to the study, service seeking behaviors for victims of abuse is generally poor in Malawi. About 60 percent of children tell someone about their experience of abuse, usually a friend or family member, however, less than 10 percent of violence victims ever receive professional services.

“Now is the time to break the silence and end violence against children and women. The fight to end violence will require a multi-sectoral response. More focus needs to be placed on prevention and awareness raising on the costs and effects of violence and above all, addressing the harmful social norms that promote it,” said Patricia Kaliati, Minister of Gender, Children, Disability and Social Welfare.

Violence against children leaves detrimental effects on the victims. According to the study, children who experience violence are more likely to suffer from mental distress, indulge in smoking and alcohol abuse, contract Sexually Transmitted Infections and engage in self harming behaviors.

Again the fact that a majority of abused children tell someone about their ordeal is an opportunity for targeted services towards both the children and the people they tell. There is need to make sure that both groups know where to seek services and the importance of seeking services. Sexually abused children could for example seek medical attention, counselling and legal aid at UNICEF-supported One-Stop Centres located at major referral hospitals across the country.