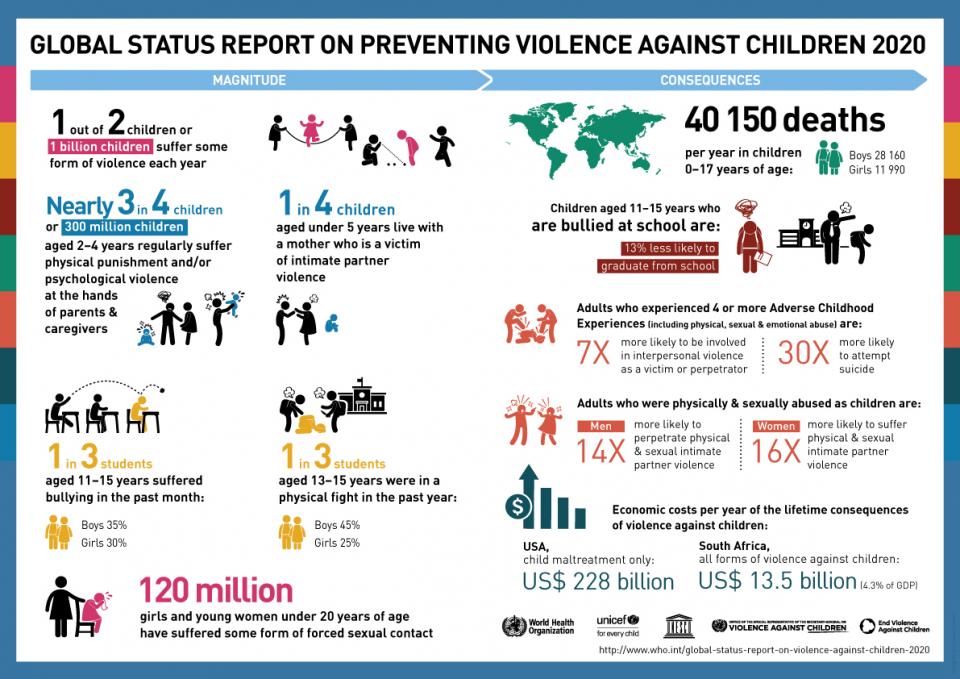 New York, 18 June 2020 - Half of the world’s children, or approximately 1 billion children each year are affected by physical, sexual or psychological violence, suffering injuries, disabilities and death, because countries have failed to follow established strategies to protect them.

This is according to a new report published today by the World Health Organization (WHO), UNICEF, UNESCO, the Special Representative of the United Nations Secretary-General on Violence against Children and the End Violence Partnership.

“There is never any excuse for violence against children," said Dr Tedros Adhanom Ghebreyesus, WHO Director-General. “We have evidence-based tools to prevent it, which we urge all countries to implement. Protecting the health and well-being of children is central to protecting our collective health and well-being, now and for the future.” 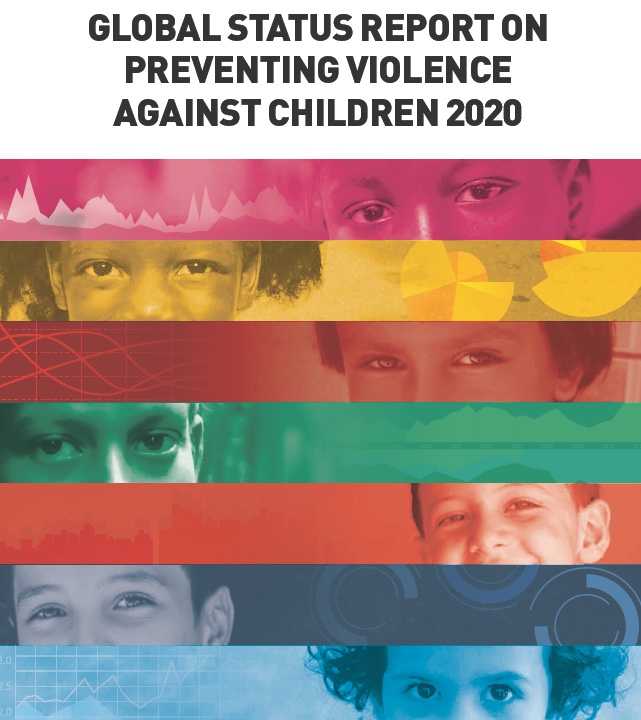 The report – Global Status Report on Preventing Violence Against Children 2020 – is the first of its kind, charting progress in 155 countries against the “INSPIRE” framework, a set of seven strategies for preventing and responding to violence against children. The report signals a clear need in all countries to scale up efforts to implement them. While nearly all countries (88%) have key laws in place to protect children against violence, less than half of countries (47%) said these were being strongly enforced.

The report includes the first ever global homicide estimates specifically for children under 18 years of age – previous estimates were based on data that included 18 to 19-year olds. It finds that, in 2017, around 40,000 children were victims of homicide.

“Violence against children has always been pervasive, and now things could be getting much worse,” said UNICEF Executive Director Henrietta Fore. “Lockdowns, school closures and movement restrictions have left far too many children stuck with their abusers, without the safe space that school would normally offer. It is urgent to scale up efforts to protect children during these times and beyond, including by designating social service workers as essential and strengthening child helplines.”

Of the INSPIRE strategies, only access to schools through enrollment showed the most progress with 54% of countries reporting that a sufficient number of children in need were being reached in this way. Between 32% to 37% of countries considered that victims of violence could access support services, while 26% of countries provided programmes on parent and caregiver support; 21% of countries had programmes to change harmful norms; and 15% of countries had modifications to provide safe physical environments for children.

About 80% of countries have national plans of action and policies but only one-fifth have plans that are fully funded or have measurable targets. A lack of funding combined with inadequate professional capacity are likely contributing factors and a reason why implementation has been slow.

The COVID-19 response and its impact on children

“During the COVID-19 pandemic, and the related school closures, we have seen a rise in vi 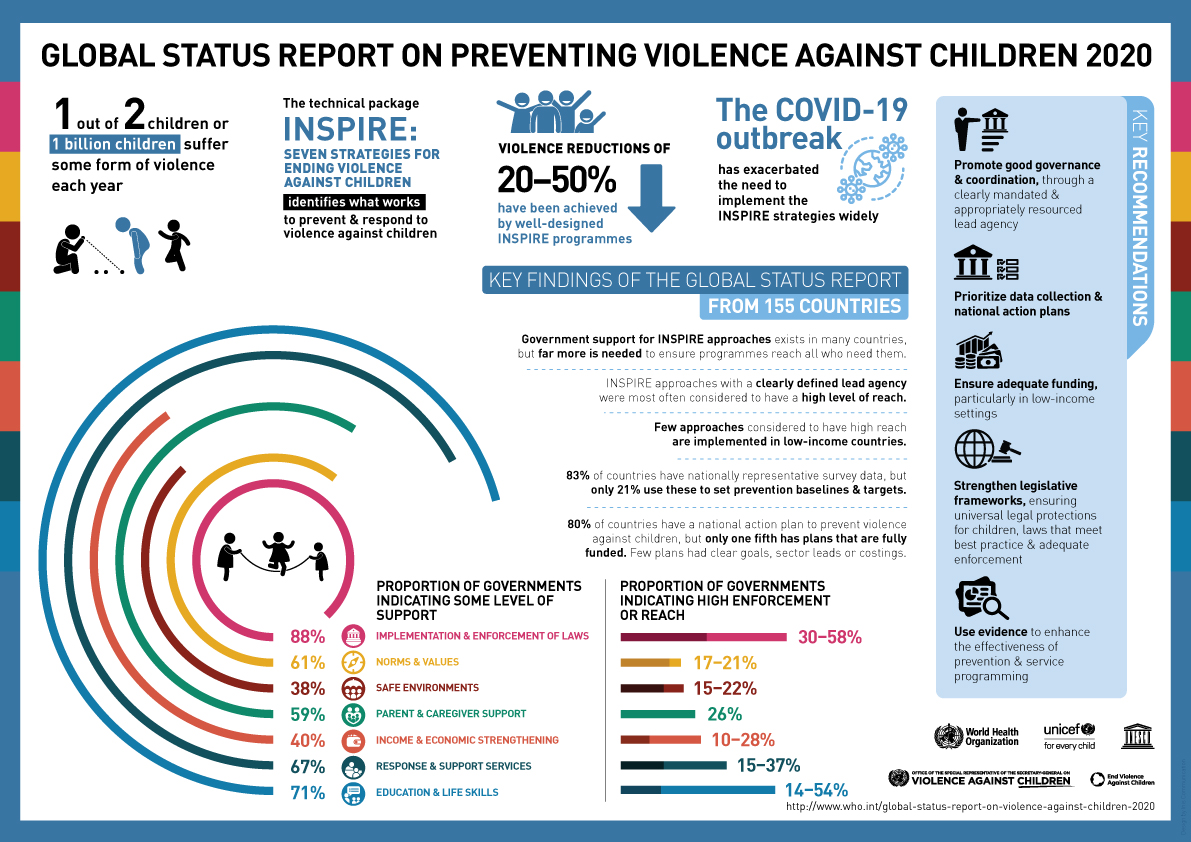 olence and hate online – and this includes bullying. Now, as schools begin to re-open, children are expressing their fears about going back to school,” said Audrey Azoulay, UNESCO Director-General. “It is our collective responsibility to ensure that schools are safe environments for all children. We need to think and act collectively to stop violence at school and in our societies at large.”

Stay-at-home measures including school closures have limited the usual sources of support for families and individuals such as friends, extended family or professionals. This further erodes victims’ ability to successfully cope with crises and the new routines of daily life. Spikes in calls to helplines for child abuse and intimate partner violence have been observed.

And while online communities have become central to maintain many children’s learning, support and play, an increase in harmful online behaviours including cyberbullying, risky online behavior and sexual exploitation have been identified.

“Whilst this report was being finalized, confinement measures and the disrupted provision of already limited child protection services exacerbated the vulnerability of children to various forms of violence,” said Najat Maalla M’jid, Special Representative of the United Nations Secretary-General on Violence against Children. “To respond to this crisis a unified, child rights and multisectoral framework for action for children is critical requiring a strong mobilization of governments, bilateral/multilateral donors, civil society, private sector and children, whose views must be heard and truly taken into account to ensure duly protection and the possibility for all to thrive and reach their full potential.”

Accelerating action to protect children
WHO and its partners will continue to work with countries to fully implement the INSPIRE strategies by enhancing coordination, developing and implementing national action plans, prioritizing data collection, and strengthening legislative frameworks.  Global action is needed to ensure that the necessary financial and technical support is available to all countries. Monitoring and evaluation are crucial to determine the extent to which these prevention efforts are effectively delivered to all who need them.

“Ending violence against children is the right thing to do, a smart investment to make, and it’s possible.  It is time to fully fund comprehensive national action plans that will keep children safe at home, at school, online and in their communities,” said Dr Howard Taylor, End Violence Partnership. “We can and must create a world where every child can thrive free from violence and become a new generation of adults to experience healthy and prosperous lives.”

The data for the report was compiled through a survey administered between 2018 and 2019 with responses from over 1000 decision-makers from 155 countries. The INSPIRE strategies launched in 2016 call for the implementation and enforcement of laws; changing norms and values to make violence unacceptable; creating safe physical environments for children; providing support to parent and caregivers; strengthening income and economic security and stability; improving response and support services for victims; and providing children with education and life skills.

The World Health Organization provides global leadership in public health within the United Nations system. Founded in 1948, WHO works with 194 Member States, across six regions and from more than 150 offices, to promote health, keep the world safe and serve the vulnerable. Our goal for 2019-2023 is to ensure that a billion more people have universal health coverage, to protect a billion more people from health emergencies, and provide a further billion people with better health and wellbeing. For more information about WHO, visit www.who.int. Follow WHO on Twitter and Facebook.

UNICEF works in some of the world’s toughest places, to reach the world’s most disadvantaged children. Across more than 190 countries and territories, we work for every child, everywhere, to build a better world for everyone. For more information about UNICEF and its work for children, visit www.unicef.org. Follow UNICEF on Twitter and Facebook.

UNESCO is the United Nations Educational, Scientific and Cultural Organisation. It seeks to build peace through international co-operation in Education, the Sciences and Culture. UNESCO's programmes contribute to the Sustainable Development defined in Agenda 2030, adopted by the UN General Assembly in 2015.