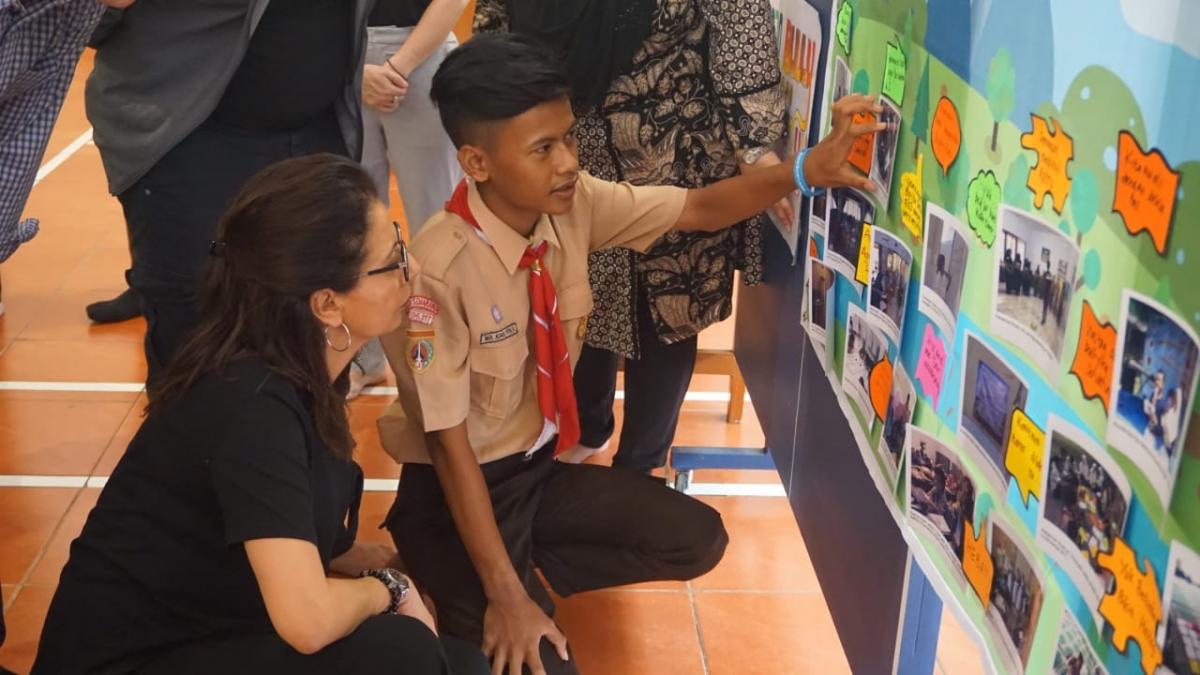 In 2021, The Special Representative actively engaged in strong mobilization and advocacy to end violence against children while building back better, through more than 250 online and in-person meetings with Member States (including 38 States presenting VNRs in 2021), intergovernmental regional organizations, civil society, faith-based organizations, the private sector, and academia the SRSG established strategic goals to keep the promise of protecting children from violence leaving no child behind.

The SRSG continued to share evidence-based actions and develop tools to support Member States and others. She developed an advocacy brief outlining the enormous returns of investing in integrated services for children and their caregivers for economic growth and human capital development notwithstanding fiscal constraints. She promoted this paradigm shift through a dedicated VNR lab during the 2021 High-Level Political Forum and her bilateral engagement with Member States, the World Bank, the IMF and donors at global level and during her country missions.

Key achievements 2021 and the way forward 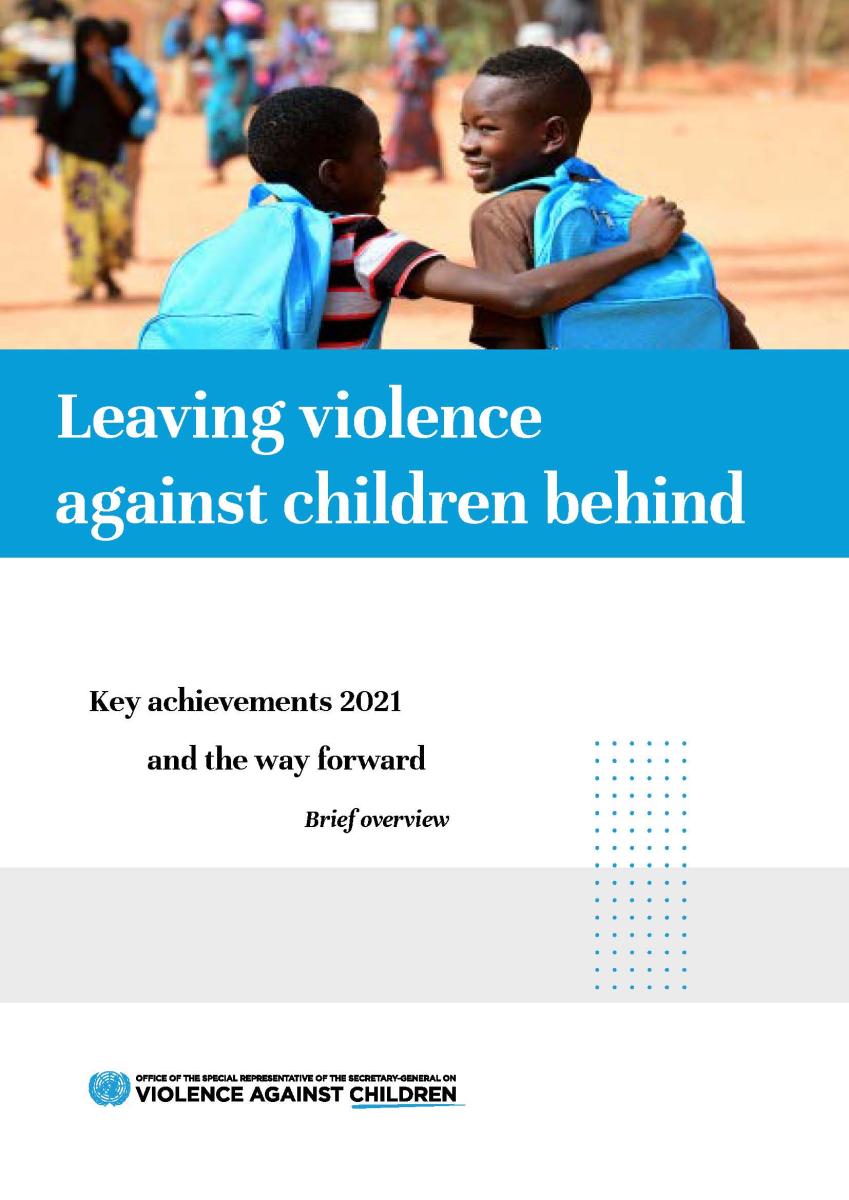 The SRSG continued to meet regularly with children from all regions and backgrounds - including the most vulnerable - and channel their concerns and recommendations to decisionmakers. She promoted and supported children’s involvement in decision-making processes, including the development of new constitutions in Chile and Chad. In addition, she updated the global mapping of child-led and peer-to-peer initiatives, where they are taking action to promote and build safe, just, healthy and inclusive societies.

More and more, children are acting as agents of change in efforts to eliminate violence. Children from 246 organizations across 83 countries are taking part in actions for positive change.

Children’s protection from violence is at the core of the Convention on the Rights of the Child and an obligation for Member States to fulfil. As the “Decade of Action to deliver the SDGs by 2030” kicks off, communities around the world are coming  together to accelerate efforts to reach the SDGs. Achieving the SDGs will help reduce the risk of violence in children’s lives and provide effective responses for its victims. At the same time, failing to reach all the SDG targets related to violence against children – especially target 16.2 – will hinder social and economic progress across the whole 2030 Agenda for Sustainable Development.

Celebration of the 75th anniversary of the United Nations provided a unique opportunity to increase momentum towards the realization of every child’s right to live free from violence. The international community needs to ensure children are at the front and center of these discussions and active participants in making the decisions that shape their world. 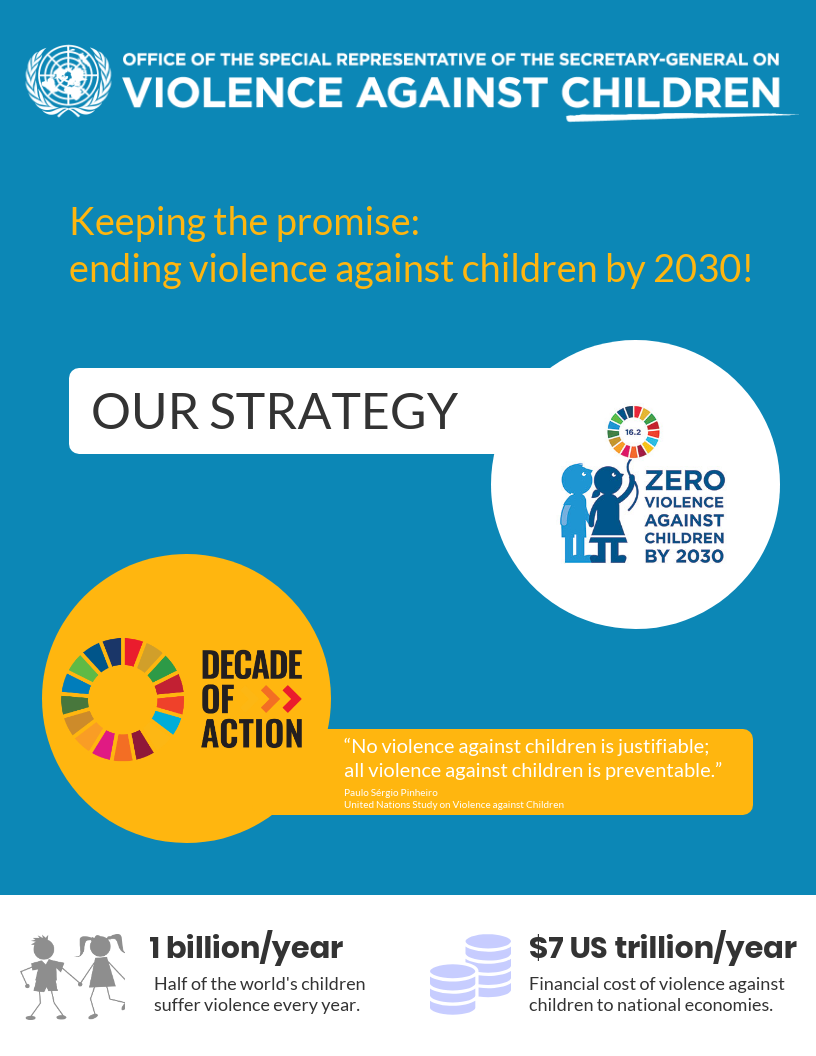 Our Vision: All children live free from violence
Our Mission: Act as a global, high-level and independent advocate for the promotion of the right of all children to freedom from violence
Our Priorities:
1. Accelerating implementation of SDG Target 16.2 and other related SDGs
2. Ensuring that all forms of violence are included in the implementation of the 2030 agenda for Sustainable Development
3. Amplifying the voices of children

Accelerating implementation of SDG Target 16.2 and other related SDGs 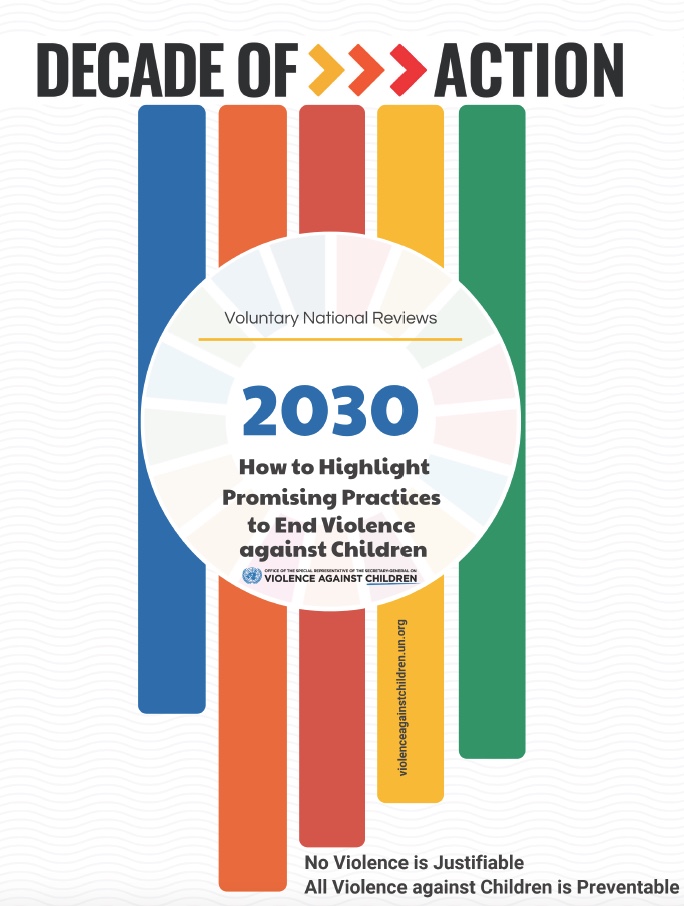 All 17 of the Sustainable Development Goals touch children’s lives in one way or another while the drivers of violence against children span the political, economic, social and cultural policy environments.

The 2030 Agenda for Sustainable Development has key targets aimed at ending different forms of violence against children, as well as targets to address factors that drive violence against children. Poverty, gender inequality, climate change and natural disasters, and social discrimination make children more vulnerable to various forms of violence, including human trafficking.

Reflections on reporting in the 2021 Voluntary National Reviews 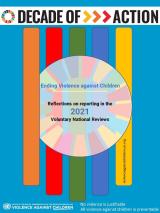 Following the preparation and wide dissemination of the first briefing note  prepared by the SRSG, the office reviewed the VNRs presented at the High-level Political Forum in 2021,

The 2021 HLPF focused on a set of SDGs directly related to protecting children from violence, as well as its drivers. These included the goals on poverty, hunger, health and well-being, decent work (including ending child labour), inequality, and climate action.

The HLPF also reviewed SDG16 and its specific target (16.2) to end all forms of violence against children

In preparation for the HLPF Special representative Maalla M'jid met with almost all  Member States presenting a VNR in 2021 to explore how their national process could be child-sensitive and child-inclusive. Where relevant, I also engaged with the United Nations country team and Resident Coordinator to ensure child rights were reflected in their support to the national VNR process. In addition, she participated in several preparatory national policy dialogues, and met with representatives of civil society, and children and young people.

The office prepared an additional document that provides an overview of the VNRs presented as well as important reflections on the reports, including examples illustrating how Member States are incorporating ending violence against children into their national development process

We hope all Member States will find this document helpful, particularly those which will be preparing Voluntary National Reviews in 2022 and start working on ways to share progress made towards ending all forms of violence against children.

Reflections on reporting in the 2020 Voluntary National Reviews 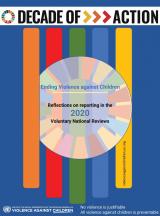 In the previous year, the office reviewed the VNRs presented at the High-level Political Forum in 2020, it was encouraging to see that Member States increasingly recognize that ending violence against children is critical to making progress across the SDGs.

To further support Member States in the preparation of their upcoming VNR reports, the office of the SRSG prepared an additional  documentPDF that provides an overview of the VNRs presented as well as important reflections on the reports, including examples illustrating how Member States are incorporating ending violence against children into their national development process.

Agenda for Action in response to Covid19 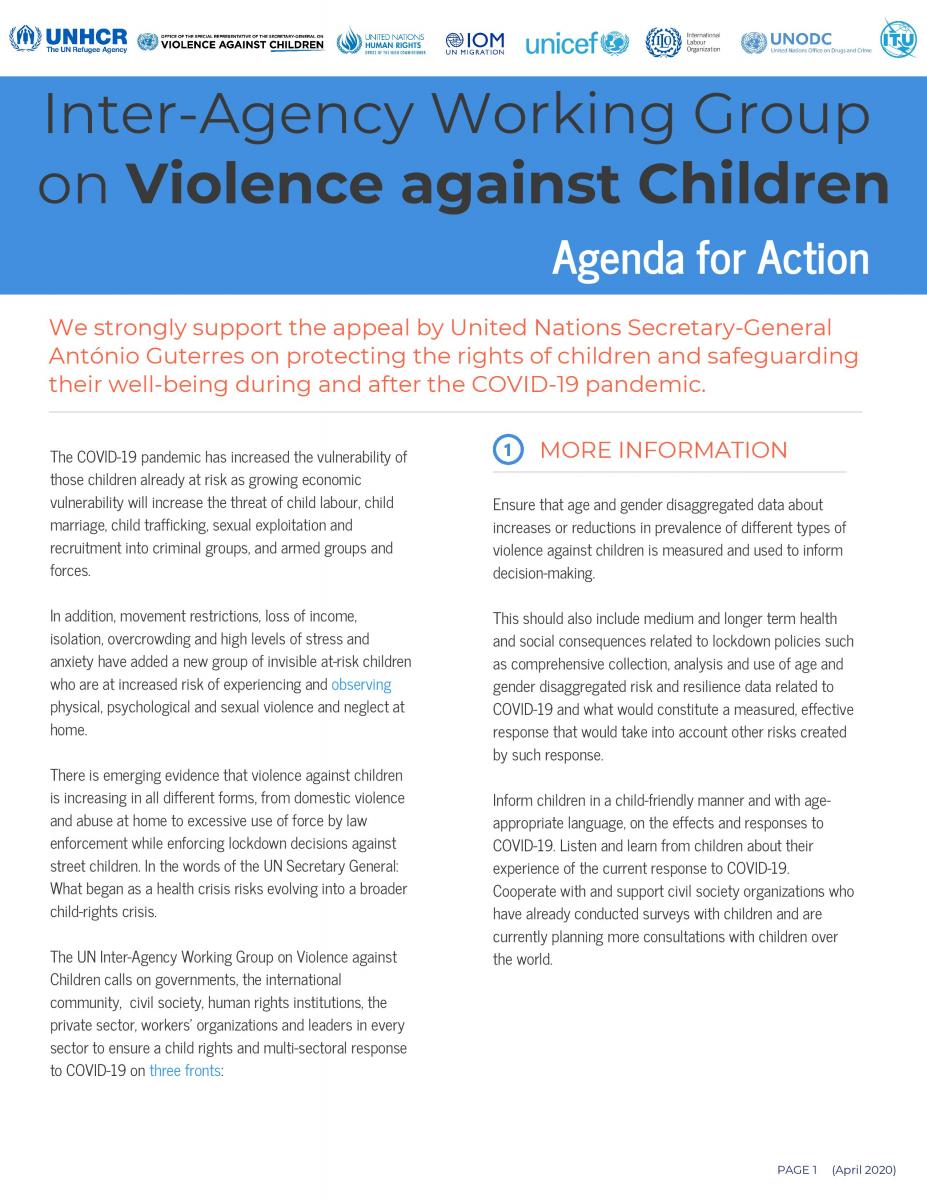 Following the Secretary General’s policy brief on the impact of COVID-19 on children, the UN Inter-Agency Working Group on Violence against Children has put together an Agenda for Action. The Agenda for Action is based on the different mandates of the entities involved and provides a child rights and multi-sectoral framework for action.

The Agenda calls for strong mobilization of governments, bilateral/multilateral donors, civil society and private sector to:
•    safeguard social protection, health, education and protection of children services;
•    ensure children are duly protected and have the possibility to thrive and reach their full potential, when this crisis will be over;
•    achieve the Goals and Targets of the Sustainable Development Agenda.

As the UN Study on Violence against Children highlighted, no violence against children is justifiable and all violence against children can be prevented. The recommendations of the UN Study are anchored in a strong human rights normative foundation, provided by the Convention on the Rights of the Child and its Optional Protocols and other international instruments on children’s rights.To consolidate the human rights foundation of children’s freedom from violence, the SRSG launched with other UN partners a global campaign to achieve universal ratification of the Optional Protocols on the Sale of Children, Child Prostitution and Child Pornography, and on the Involvement of Children in Armed Conflict; and since its adoption in December 2011, the Optional Protocol to the Convention on the Rights of the Child on a communications procedure

The UN Study recommendations provide a navigation chart to accelerate and monitor progress in violence prevention and responses. In view of their particular urgency, the Study identified time-bound targets for three of these recommendations.

For this reason, the SRSG gives special attention to them while supporting efforts towards the implementation of the 2030 Sustainable Development Agenda:

On September 2015, the new global sustainable development agenda was unanimously adopted by the Member States of the United Nations. The new agenda includes for the first time a specific target (16.2) to end all forms of violence against children, and ending the abuse, neglect and exploitation of children is mainstreamed across several other violence-related targets. Having been a strong advocate for the inclusion of these violence concerns, a core priority of the mandate is to support global, regional and implementation efforts to reach SDG target 2030 and make the vision of Agenda 2030 a reality for the world’s children.

The promotion of meaningful and safe child participation is also at the top of the SRSG’s agenda.
Having led major advocacy efforts for the inclusion of the elimination of violence against children as a target and a cross-cutting concern in the Sustainable Development Agenda, SRSG Maalla M´jid is now giving priority attention to efforts supporting the implementation of Agenda 2030 at global, regional and national level.

Violence related to SDGs including Target 16.2