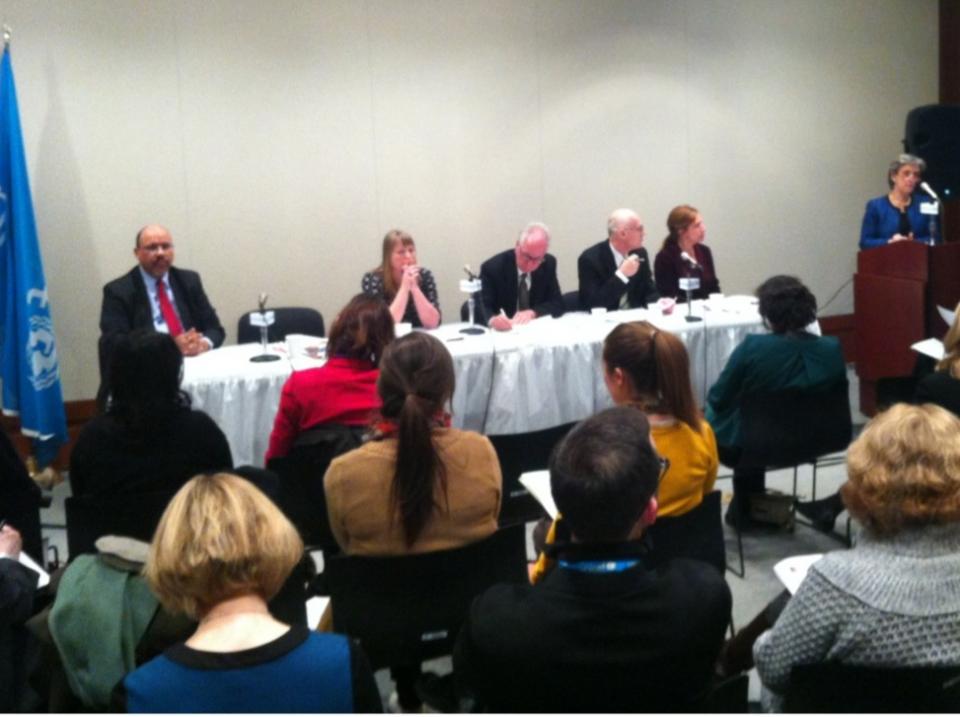 New York, 25 March 2013 - SRSG Santos Pais joined high-level Government officials, UNICEF and civil society representatives in a strong call for the inclusion of children protection from violence as a key dimension in the post 2015 development agenda.

Hosted by UNICEF, the event "The Prevention of Violence against children and its place in the Post-2015 Agenda" was co-organized by the Governments of Canada and Liberia, moderated by the Government of Sweden, and also included the participation of a representative from the US Government, of the Global Director of the UN Millennium Campaign and of the Secretary General of ChildFund Alliance.

The event was a momentous occasion to discuss and mobilize support for the inclusion of children's protection from violence in the post 2015 Agenda. As noted by SRSG Santos Pais, countries affected by violence tend to lag behind in achieving the Millennium Development Goals and when violence prevails, people are more likely to be malnourished and live in poverty, and children are three times more likely to be out of school.

"For children, violence goes hand in hand with deprivation, high risks of poor health, poor school performance and long term welfare dependency. Placing children protection from violence in the post 2015 Agenda is therefore a human rights imperative and a question of good governance and good economics", emphasized the SRSG.

Ms. Santos Pais highlighted the importance of effective and solid collaboration amongst partners to advance this process and called for the development of strong and influential advocacy messages to galvanize support across regions, and for the identification and promotion of concrete goals, targets and indicators to accelerate and monitor progress in children's protection from violence. "It is high time to measure what we treasure!" stressed the SRSG. "And to be effective, it is indispensable to include in this process children and young people, who are the most affected!"

Ms. Julia Duncan Cassell, State Minister of Gender and Development of Liberia, noted the significant progress achieved on the protection of children from violence in Africa and called for an extra effort from Governments to strengthen child protection systems and to promote comprehensive awareness raising campaigns on violence prevention at the national level. Ms. Margaret Biggs, President of the Canadian International Development Agency highlighted the importance of pursuing children’s concerns in a holistic way and of including children’s protection from violence as a distinct dimension in the post 2015-agenda.

The Deputy Executive Director of UNICEF recalled the important contribution made by the UN Study on Violence against Children and the sound evidence that has been further built on this issue over the past years, as well as the high return an effective investment in violence prevention can bring. Recognizing that violence against children is an area where human rights and science have merged, the US Government emphasized the central attention given to this dimension in the recently launched US Action Plan on Children in Adversity and the strong commitment to enhance strategic partnerships around this topic.

At the event, the Child Fund Alliance stressed, on behalf of NGO partners, the importance of involving children in this process and of associating the private sector in ensuring children’s safety and freedom from violence, dimensions which were equally highlighted during the debate.